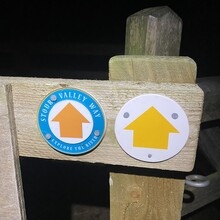 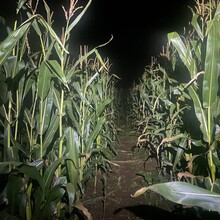 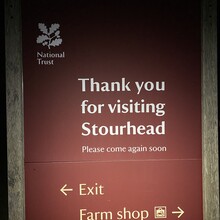 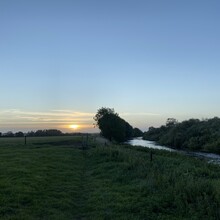 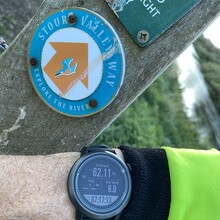 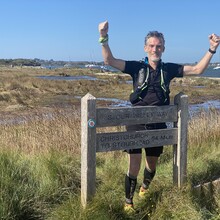 The Stour Valley Way follows the River Stour from the source to the sea or vice versa. It is 100km long, or 64miles in old money.

Starting at Stourhead (the source) just before midnight I finished 12hrs45m later at Hengitsbury Head (the sea).

I also chose to do this solo and self-supported, meaning no outside help or running buddies. I carried everything I needed and extra water was stashed along the route in a hedge and under a log beforehand.

The route starts off well marked with the small signs on fence posts and gates, always interesting to follow at night, but as you get further away from Stourhead they seem to dwindle off a bit, becoming more popular again nearer to the larger towns. I was greeted by a few cows who didn't like being woken in the night, probably as much as I wasn't too keen on them crowding around and following me across their field! This was one of many fields of cows.

There is quite a bit of road and small single tracks, maybe I should do this section in the daylight one day as I've only ever run here in the dark. Winding down to Sturminster Newton there are a few bridges and mills crossing the river, as as it's quite small still it's tricky to know what side you are sometimes. Down to Fiddleford and Hamoon before the 2 larges hills on the route, Hambledon Hill and Hod Hill I find myself on my familiar training territory passing my house in Blandford at 50km 05:45, which is the halfway point, but keep moving. From now it's relatively flat, to Wimborne as the world wakes up and so do I.

I crossed the Stour at Eye Bridge, opting for the route around Wimborne rather than through the town - more bovine company here too - before hitting the outskirts of Poole and Bournemouth. I think it's so nice that despite running through what looks like a built-up area on a map for the most of it I was on paths by the riverside, really only running through the streets after Iford and Tuckton. It was very busy from here on to Hengitsbury Head visitors centre, and you realise there's another 2km to the actual Hengitsbury Head.

My water drops were at Child Okeford and Shapwich, calculated almost too perfectly - finishing off with 200ml on the last 1km.

No fanfare or welcome party, just a sweaty me eager for a beer at the nearby cafe.

Next time will be in daylight and from the sea to source.