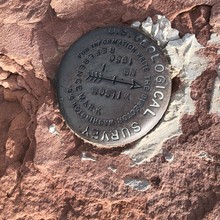 Awesome route: running, bouldering, and stiff climbing. Two days beforehand I had stashed a water bottle and two granola bars near the top. On the way down from the ridge to the canyon I slipped and got a bad cut on my hand, but it didn't get in the way. The run across the desert seemed a lot longer on the way out than on the way in.

I used my old Brooks GTS 19 shoes, since their worn down soles grip the rock well and it doesn't matter if they get dirty or beat up. Which was a good choice, because one of them now has a massive hole in the side and I'll probably throw them out. :(
I carried a hydration vest with nothing in it except my phone on the way up, and used it to hold my water bottle and granola bars on the way down.
I was using my phone to record on Strava, but I also used the stopwatch on my wrist watch so I could easily keep track of where I was at time-wise.

Such a fast effort for this terrain!

Ooh, good point. I hadn't noticed that. I'll ask him.