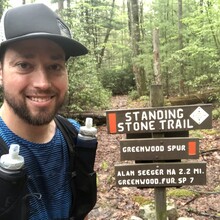 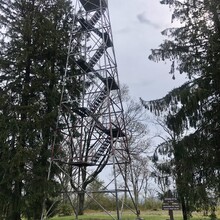 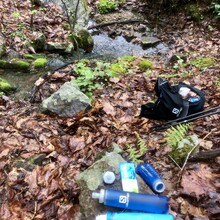 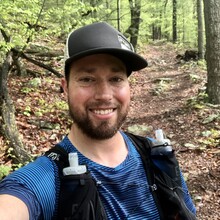 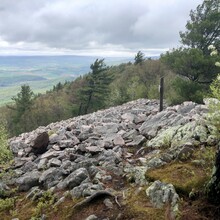 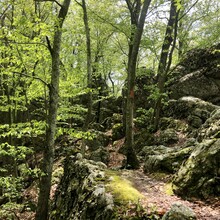 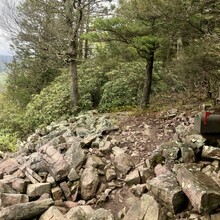 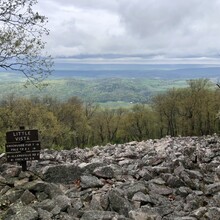 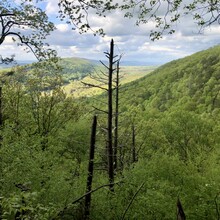 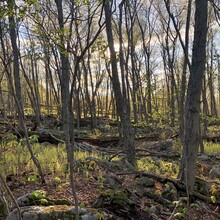 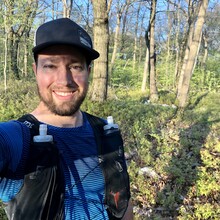 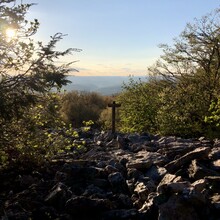 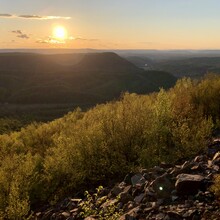 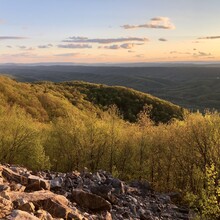 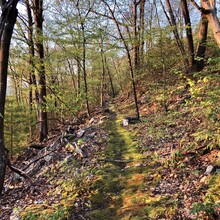 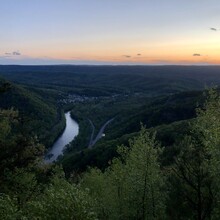 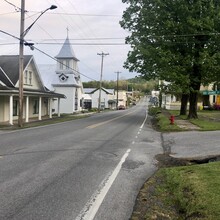 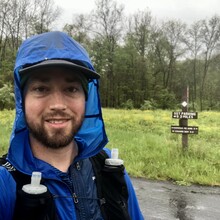 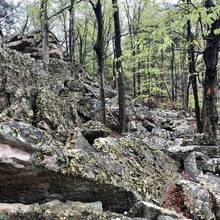 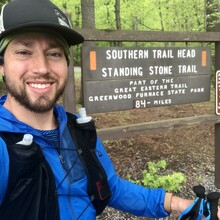 I started the Standing Stone Trail at the northern terminus in Alan Seeger Natural Area at 8:05am on Saturday May 8th.  The weather was considerably colder than normal for May with temps in the low 30s to start the run and trail conditions were wet from heavy rain the day prior.  I began running at a very conservative pace and stopped multiple times early on to monitor my Garmin inReach battery life since I noticed it draining much quicker than normal, likely due to the steep surrounding topography.  The battery level would be something I continued to monitor throughout the run, and I made logging adjustments to attempt to minimize the drain.  Ultimately, I opted to turn the inReach off over night to conserve battery for the daytime live tracking and to keep enough power for emergency purposes.  The SST is a wild trail with many sections extremely rocky and rugged, with some easy trail scattered in between.  The entire trail is marked by orange blazes with most of the trail easy to navigate.  Some sections of the trail are clearly less traveled than others as evident by thicker vegetation around and on the trail.  One section proved challenging to navigate at 3:30am as many of the trees throughout the area were bulldozed, including some of the trees displaying the orange blaze.  Navigating this portion of trail by headlight through waste high tree debris was the worst of the route finding.  The rock on the trail is relentless in spots and it ranges from secure stable boulders to rock that will cause you to roll your ankle if you step wrong.  Some of the ridges offer sections of slabby angled rock, which is fun at first, but certainly was challenging the more I fatigued.  Much of the rock is covered in lichen also, which when wet, is extremely slick.  The Stone Mountain ridge has plenty of this lichen and given the wet conditions it proved challenging to navigate while staying upright.  Somehow, I managed to make it through the entire route without falling once.  That said, I did have countless close calls.  Portions of the trail have nice mellow sustained running, but to gain the ridgelines you are going up steep trail, and the downhill is just as steep.  I felt good up until around 15,000 feet of climbing, then not so much.  The remaining 2,000 plus vertical feet was not as enjoyable.  The downhill pounding certainly left my knees hurting bad as it became difficult to manage a running motion towards the end.  Water sources on the trail are abundant, and every source that I mapped out in advance was flowing good considering all the rain.  I carried two 500 mL soft bottles and a Katadyn BeFree water filter attached to a third 500 mL bottle.  For most of the run, I kept the two front vest pocket bottles filled: one with straight water and the second with Nuun Endurance powder mixed in.  For one of the longer waterless ridge sections I began that stretch with all bottles filled to ensure I would stay hydrated.  As far as food goes, I started the run carrying 10,370 calories worth of food.  My food options consisted of Nature’s Bakery brownie bars, peanut butter packs, Honey Stinger waffles and chews, and Justin’s peanut butter cups.  All this food became unappealing early on, but I continued to shove food in every couple of hours.  At one point near midnight, I noticed I was beginning to have some digestion issues, but fortunately it did not progress worse.  The night portion was one of the two aspects I mentally prepared for the most and it did not disappoint.  The temps dropped significantly overnight, and I was experiencing the sense of isolation miles from civilization.  I encountered three porcupines on separate occasions which offered me a strange sense of comfort.  Overnight I did not break much other than to filter water and shove down some food as I would quickly need to get moving again to get warm.  The second thing that I mentally prepared for was the ridge above Cowan’s Gap near the southern terminus.  This ridge has some of the most technical sections of trail with all the tricky rock.  With a fresh mind and body, this is the sort of running I love, but 76 miles in I was really struggling to navigate through it.  My pace was brutally slow at times, but that was necessary to stay upright.  This section of the trail was the only time I started to experience slight hallucinations as I kept jumping out of my shoes seeing snakes.  The snakes were sticks, roots, and pinecones, but my mind was feeling the fatigue from nonstop focus this trail requires.  I felt physically strong up through mile 74, but I suffered heavily for the final 8 miles.  Ultimately, I finished in 32hour 03minutes and 29seconds at Cowan’s Gap State Park on Sunday May 9th.