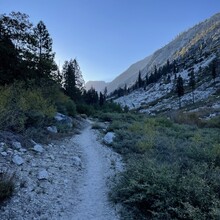 This dream, or obsession, started back in October of 2017 after a friend and I backpacked Rae Lakes Loop in 4 and half days. On our 2nd night, right before the 10k mark along Woods Creek, we saw a few headlamps in the dark, bumping up and down the trail. We were so confused as to what they were doing moving so quickly this late at night. One of us turned to the other and said, "Do you think they are trying to do this loop in one go?" I am not positive whether that is what they were doing or not, but I am sure that I learned about this thing called "ultra running" shortly after that trip.

Fast forward 5 years, with more than half of that time truly training with this endeavor in mind and two attempts already under my belt. I spent the 2 weeks leading up to the attempt at altitude. About a week in Lake Tahoe and another week in Strawberry, CA. I knew that if I were to have any chance at it, I would need to be acclimated. Shout out to Scott and Tim for hosting me in their cabins.

I began the attempt at 6:35am, just as the sun's light started blooming. The first two miles were the last two miles that anything felt relatively easy. The switchbacks were much tougher than I gave them credit for in my mind and I swore there was much more flat to run before the Lake Reflection junction. I noticed the sun was just about to rise over the path and snapped a quick photo, the only real one I took on the go. My first water refill was right before the second set of switch backs right around Mile 10.

I came across two backpackers, a few miles before Glen Pass, who told me they saw another ultra runner who was "booking it" going the same way. The thought that someone else had started before me and was making better time gave me a bit of anxiety and lot more motivation to pick up that pace. I saw the runner just before the top of Glen with just a single hand water bottle. It turned out he was coming from their camp at Junction Meadow and not going for the full route, which gave me a bit of relief.

I snapped a quick video at the top of Glen Pass, cresting in 3 hours and 31 minutes. The descent down from Glen was quick and taxing, nearly falling once or twice. I was hoping to push a lot a harder along Rae Lakes, but I had lost a gear or two from the climb and quick descent. After Glen, there isn't any sustained climbing, but each smaller ascent was a battle, often times bringing me to a walk or worse. My second refill was a bit after dollar lake.

With 12 miles left and about 5 hours and 20 minutes in, I knew that I just had to click off 10 minute miles the rest of the go and I would have a decent shot. The spreadsheet I had created months before, listing off every single mile time that I also saved as my lock screen background, did not serve me all that well. I barely looked at it after mile 5. It was too small and I just concerned myself with going as fast as I could, without going too fast. Each of those last miles were very close to that 10 minute mark. My last water refill was at Paradise Valley.

In the last 4ish miles I was running on fumes and thought I had run out of gels and food (I had one small bag of Gardetto's hiding in my pack). I resorted to pouring my Gu Rocktane drink mix directly into my mouth because my vision was starting to get a little blurry and I really wasn't able to push on those little uphills at the end.

The last big hurdle came at mile 3 when a juvenile bear was hanging out on the trail, making the day hikers I happened upon a bit nervous. I knew I didn't have much time to mess around, so I screamed as loud as I could, "HEY BEAR," about 30 times, banging my hiking sticks together as I inched closer. He got about 15 feet away from the trail so I ran by him, scaring the crowds of families 50 yards on the other side because they feared the bear was running after me.

I got to the trail merger (2 miles out) with about 25ish minutes left. I figured if I could just breath and move quickly, I would make it. Things started shutting down, I was cramping pretty badly, and could barely make out a smile to the fresh eyed hikers saying hello to this blood shot, haggard runner, hobbling to the finish line of a 5 year dream.

I made it to the parking lot bridge with 5 minutes to spare, opened the back of my van to grab water, and collapsed to the ground for a solid 20 minutes. SPENT.

What a wild time. I am still in disbelief and surprised the hell out of myself. Huge thanks to my coach, supportive partner, amazing physical therapist, and all the friends that helped me up to that day.

Not sure what is next, but happy to cross this one off the list.