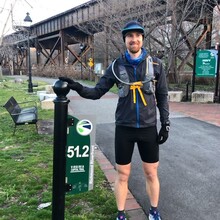 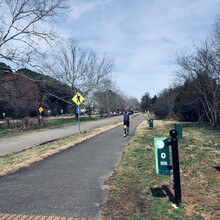 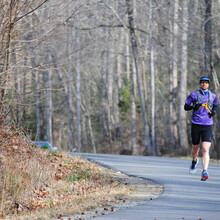 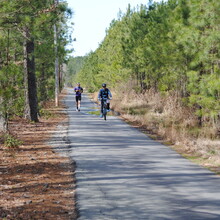 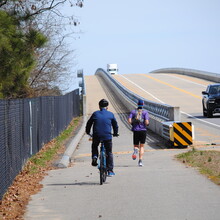 I was looking for something somewhat close to home to run as a hard training run for a 24 hour race that I have coming up at the end of April. I came across the Capital Trail FKT and thought it would be perfect being relatively flat (like my upcoming race) and the current time seemed like a reasonable target. I would run a supported one way attempt from Richmond to Williamsburg. The course totals 51.2 miles. The previous time was 7:22:59 (8:39 pace). I also targeted a stretch goal, which spoiler alert - I did not meet, of a sub 7 hour 50 mile split (8:24 pace).

My wife Katie and I made the drive down from Charlottesville on Saturday morning. My dad also came up from Newport News. I targeted a 7:20 AM start, and actually got off a few minutes late at 7:26.

I was originally planning to run this a few weeks earlier, but pushed it in part due to the recent passing of my grandmother. In her honor, I chose to wear purple for this run, which was her favorite color.

I started a little faster than I intended. I tried to practice patience to keep it slow early. I thought that I had done well, but looking at the Strava splits in hindsight, I definitely see some miles that could have been slower. This will be a big focus for me in the remainder of my training for 24 hour. Katie and my dad were in separate vehicles and kept leap frogging me and each other to provide aid on the course. I wore a pack for the duration of the run so that I could have consistent access to water and calories. I own two packs and so rather than stopping and filling, I would just trade my empty pack for a full one as I ran past Katie. This is why my pack changes over the course of the day in the pictures. I traded packs twice over the course.

I ran really well through about mile 37 when I started to realize that I was slowing while giving the same, if not more, effort. My dad parked his car and joined me on a bike at the 13 mile marker (that is 13 miles remaining for me since the markers start in Jamestown and end in Richmond). It was really helpful to have a cheerleader alongside at the end. Unfortunately, my struggles continued. I couldn't get much in the way of calories down. I was feeling pretty nauseas whenever I tried to eat. I knew that the lack of calories would lead to energy issues and I was already feeling fatigued. A primary goal of mine for this effort was to finish without completely wrecking myself. This was a training run for a larger goal and I wanted to make sure that I didn't have to take 2-3 weeks off after this one. So I decided to cut it back and basically throw in the towel on the sub 7 hour 50 mile split goal to mitigate against a complete blow up that maybe would have resulted of missing the FKT completely and to limit the damage to the body. From mile marker 10 to 5, I would walk the last minute of each mile. Then from 5 to the finish, I would walk 40 secs each half mile. That felt very manageable for me and I was able to finish in 7:17:15, taking about 5.5 minutes off the previous FKT.

Big thanks to Katie and my dad for their incredible crewmanship!

I'm very pleased with the effort overall. This was by far the longest run of this type (road, relatively flat) that I've done, so it is nice to find out where my fitness falls. I learned that I need to work on being a little more patient with my pacing early, especially heading into a longer event like a 24 hour. I was pleased with my self-awareness around mile markers 13 to 10 to troubleshoot and ability to control the pace down to something manageable that resulted in a more comfortable finish, without risking a total melt down.

Stuff I drank - took a partial bladder (0.75L) each time just to keep the weight down since I had opportunities to trade off often. So in total about 2L of TW water there. Also started taking straight water in the last 10 miles or so and maybe had another 1.5L or so.