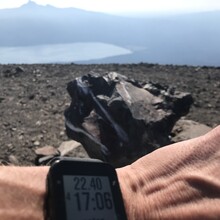 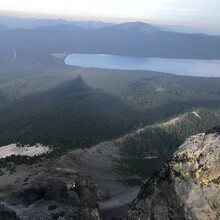 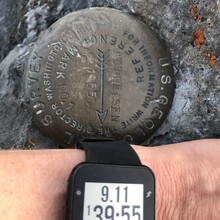 This line caught my attention last fall when we moved down to Medford from Eugene.  Two of the finer high Cascade peaks rising opposite, but nearly equidistant from the shores of Diamond Lake.  When I saw that Jason had thrown down a benchmark time and added the route to the site I was even more motivated to throw down on the route, so thanks to Jason for that.  I chose to start the route at the Mt. Bailey trail head with the goals of having fresh legs for the initial traverse over to Thielsen and then up to the summit of Thielsen while also abaiting the chances of seeing less people on the trail, which was aided by an early(5:42am) start.  I used a combo of Diamond Lake Loop Rd(4795), an unnumbered dirt road(just south of the RV Park), and HWY 140 to get from Bailey TH to Thielsen TH, arriving 25 minutes into the run.  There was very little traffic on the route of Thielsen and I was on the summit around 1:39 total time.  The descent off Thielsen went pretty quick, especially from the PCT junction down and I held a strong cadence back over to Bailey TH at 2:55 total time.  At the Bailey TH I spent 6ish minutes stopping at my truck to refuel, switch from a vest to waist belt, and drop my shirt as the heat was already heavy.  The initial few miles of climbing up Bailey are pretty cruiser grade trail and I felt strong heading up through the trees.  As I approached the crater and full sun exposure I hit a pretty big wall and slowed to a hands on knees slog, adding in shuffle steps where I could.  The section from the crater to the summit is a fantastic and interesting way trail that skirts a couple of gendarmes, but my head was down as I moved with belabored intention.  I touched the the summit at around 4:15 total time, gathered for a moment, snapped a photo, and then pointed down to the car.  Another goal of starting at the Bailey TH was that, theoretically, I could destroy my legs on the final decent knowing I would be done for the day.  This crossed my mind on the Summit as I realized I had placed myself in a position to possibly go under 5 hours.  Unfortunately,  I didn't quite have the legs left on this day and the descent went down much slower than hoped for as I drifted back to the Bailey TH stopping the watch at 5:06:50.

All in all I was very happy with effort and feel like I gave it everything I had for that day.  I agree with Jason's assessment that this route will eventually go down under the 5 hour mark(maybe 4:40ish even?).  On the whole, the route offers a fantastic mix of surfaces and grades.  A majority of the trail is pretty cruiser grade, save for the last mile/mile and half to each summit, where classic volcano conditions arise.  The final short summit block to Thielsen should be approached with caution and focus, enlight of the athlete moving quickly.  Having said that, there are ample holds, well defined lines, and the final push is primarily incut.  Thanks again to Jason for getting this route up on the site and I look forward to seeing who throws down next!  Go get it!

Justin! Thanks for the respects and shout out! ?

Excellent running ? nice to see it so close to the 5 hour mark now.

Since we are both Southern Oregon based, lets link up sometime, I am easy to find on FB or IG!

Again, Mad props to you for getting this thing shipped!

Thanks for the kind words and bringing the stoke!  It would be great to meet up sometime, there’s a lot on my To-Do list for S. Oregon/N. California!