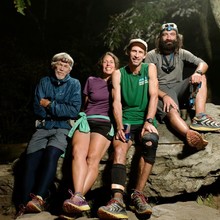 Karl Meltzer began an attempt to break Thompson's record starting August 5, 2008 (north to south). Karl, one of the nation's top trail ultrarunners, had a high level of support spear-headed by Backcountry.com. An injury forced Karl to abandon the record attempt after hiking and running 538 miles in 14 days. The La Sportiva mountain running blog has more information and interviews with Karl, David Horton, Andrew Thompson and Brian Robinson. Karl persevered and finished the AT on Sept. 29, in a total time of 54d21h12m. Meltzer tried again for the record during the summer of 2014, but quit after about 32 days.

Karl Meltzer returned to the AT for a final attempt, and succeeded in setting a new FKT of 45d22h38m (Maine to Georgia), August 3 - September 18, 2016. Meltzer was supported mainly by his father, Karl Sr., and Eric Belz. He also had support of David Horton and Scott Jurek in the latter stages of the trip. For the final stretch, Meltzer ran 83 miles nonstop in just under 24 hours. The trip was documented by Redbull. Jurek still holds the NoBo record. Good articles on Meltzer's record are by the New York Times and Outside Magazine.

The A.T. is iconic. It's got history. It's ridiculously hard. -- Karl Meltzer