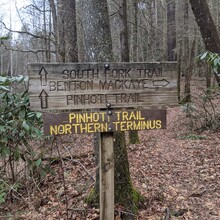 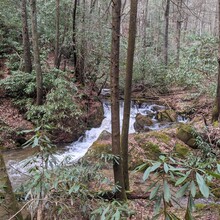 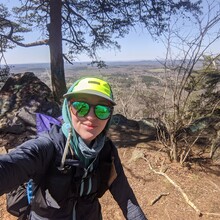 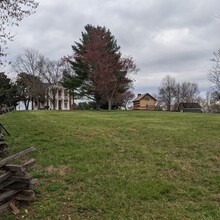 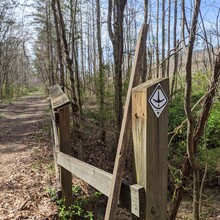 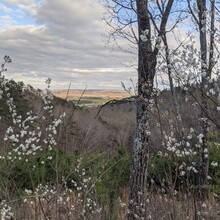 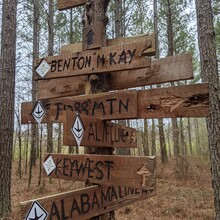 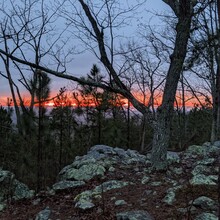 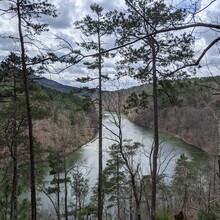 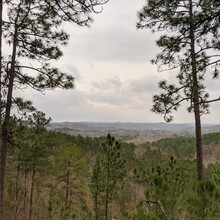 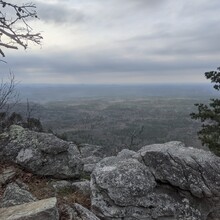 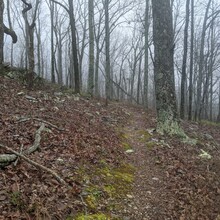 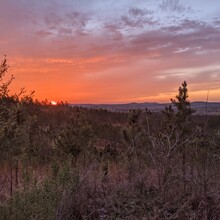 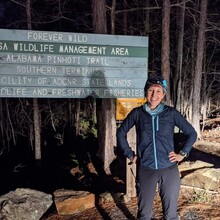 Katherine Baird from Chicago, IL completed a SOBO thru-hike of the Pinhoti Trail in 10 days, 8 hours, and 33 min. This trip was self-supported, which means that food was purchased along the way, and the only support used was what is equally available to any other hiker along the trail.

After hiking a few miles from my drop off location to the Northern Terminus, I started my hike at 1:38pm EST (12:38pm CST). There had been thunderstorms that morning and all the rivers and creeks were overflowing and quite rapid. Soon after starting I realized that my InReach wasn’t tracking or really working at all. Luckily I could mark waypoints with my GPS watch which I started doing every hour or so, and continued to do throughout the thru-hike. After 6 miles the Crenshaw Branch creek was too dangerous to cross on trail so I had to wade upstream to cross at a safer point. The rest of the day was full of downed trees and continual water crossings, and I stopped early around 6:30pm.

I started before dawn the next morning while it was still rainy and went 5 miles until a short road walk. The trail then continued up to Turkey Mountain in the mist and I was pleasantly surprised that all the trails were quite smooth and run-able. I continued to jog sections of the trail through the OHV trails. As I was jogging, I passed and waved to Nimblewill Nomad who was on his Bama to Baxter NOBO trip. After ending up at the Dennis Mill trailhead by about 3:30pm, I proceeded to road walk until past sunset and stopped near the Conasauga River.

A little over 10 miles of morning road-walking brought me to the west end of Dalton where I re-supplied and attempted to fix the issues with my InReach. Then there was another short road walk up to Dug Mountain which had a steep climb then became a ridge walk which was incredibly scenic (and the sun finally came out)! After leaving the ridge, the trail smoothed out and followed ATV trails/service roads for a bit, and I was able to jog for some stretches. After a final climb to a ridge and another descent, I ended at the Snake Creek Gap Trailhead just as the sun was setting after 7pm.

The day started with another pre-dawn climb towards a ridge. Luckily most of the trails in Georgia at this point hadn’t been too technical and were pretty easy to hike with a headlamp in the dark. I went through a few burn areas and accidentally took an alternate route (away from Pilcher Pond) by following old trail signs, so I had to backtrack to the trail and lost about 40 minutes or so. Then I went up John’s Mountain, which had a great overlook despite it being overcast.The trail gradually descended and overlapped with horse trails, service roads, and more burn areas, and I was able to jog for some portions. I reached camp on top of a ridge right around sunset. (Luckily my InReach was tracking me at this point, but I continued to save waypoints to my GPS watch.)

Once more I was able to view the sunrise from a ridgeline. After the initial climb, it was pretty easy going through the woods, before the trail descended to dirt and gravel roads for almost 15 miles. Then there was the terrifying road walk along the GA 1 Loop highway for a little over 5 miles. I was able to stay far away off the side for the majority of the walk, but there are several bridges that have to be crossed on the highway itself, so I waited until there was a break in the traffic and ran these sections. Those last miles on the highway were more exhausting than all the previous miles, so I stopped at the spur trail to the Lock and Dam Park and Campground.

About 10 miles of road-walking on smaller country roads brought me into Cave Spring, where I resupplied. As I was leaving the road south of Cave Spring and finally entering the woods again, it started to rain and this lasted almost until sunset. The trail wound in and out of the woods until going up to a ridge where I crossed both the Georgia-Alabama border and then later the halfway point for the Pinhoti. After crossing into Alabama, I noticed that the trail blazes became blue and were much more frequently marked than the Georgia portion of the trail. I made it to Davis Mountain Shelter around 6:40 CST (7:40 EST), and was able to see the most beautiful sunset after the rain stopped.

Pre-sunrise hiking was a bit more difficult in Alabama since the trail is more technical than in Georgia. I went a bit slower while it was still dark, and had to catch up by jogging downhill sections later in the morning. After crossing a dam it seemed like the trail was continually climbing and was actually eroding in places, so I had to be careful not to slip. Also the sun was out in full force so I was definitely feeling the heat and had to continually find water sources. I then went through more burn areas and down into a gorge for several miles. I broke out my headlamp for the final few miles and stayed near Coleman Lake.

It was rainy and a bit overcast in the morning, but the trail stayed fairly flat as it wound through the woods past Shoal Creek Church and past Pine Glen campground where I stopped to get water. Even though I started after 7am, I was able to jog for a few portions and had gone 10 miles before 10am. As the afternoon wore on, the trail was winding around the hills, but still nothing too strenuous so I could continue to jog the downhills. As I approached the spur trail to Heflin around 2pm, I started to hear thunder nearby but decided to continue. However around mile 23 or so, the thunder started get louder and tornado sirens (!) went off nearby. I panic-hiked for a few more miles and stopped early once I reached more of a valley near the I-20 Overpass. (I later found out a tornado touched down in the same county I was in..)

The first half of the day was fairly easy before beginning the climb into the Cheaha Wilderness Area. I resupplied at Cheaha State Park and then proceeded to continue south through the 5 miles or so of boulder fields. This was incredibly tricky, I was very thankful for my trekking poles, and I still managed to roll my ankles a few times. The views from the ridge were so beautiful and I passed a number of really nice tent sites. The boulder fields continued as I descended down and then finally cleared up as I climbed back up to Adam’s Gap. I stopped around 7:15 right after sunset near the sign for the Skyway Trail. After setting up my tent, I noticed that the slight valley and open woods around me were filled with fireflies- it was really magical seeing all of them light up.

After a few hours hiking before sunrise, I was once again at the top of a ridgeline and it was incredibly foggy. The trail would then twist into the woods to enter more slippery, wet boulder fields which slowed me down considerably. Finally the sun came out as the trail led to a short road walk over a railroad track, then into the woods for a short time before switch-backing up to Horn Mountain and a 10 mile dry section along the top of a ridge. Though mostly flat, this section was still tough because the trail was a bit more technical, and the temperature reached above 80 degrees. I was finally able to descend down to Bull’s Gap and went a couple more miles to reach a tent site on top of a clearing with an incredible view.

The last day started with another 10 mile dry section of the trail. Luckily it was mostly flat as it continued along the same ridgeline as my tent site the night before. As I descended into the woods right before the Trammel Trailhead, the skies opened up and there was a torrential downpour. I would have continued on, but there was frequent thunder and it was right on top of me. Rather than get completely soaked and continue in a thunderstorm, I set up my tarp underneath the wooden info board (which had a small roof) near the trailhead, where I was forced to wait for over an hour. When it stopped I continued on for a 12 mile road walk before entering the Terrapin Hill area, then there was about a 5 mile road walk before starting the last section up to Flagg Mountain. I entered the woods as the sun was setting, and hiked the final 5 miles in the dark with my headlamp. I reached the Southern Terminus at 9:11pm CST where Nathan and Kimm from the Pinhoti Outdoor Center were waiting.