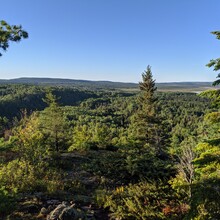 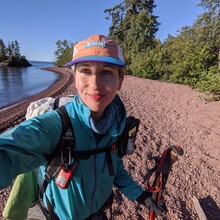 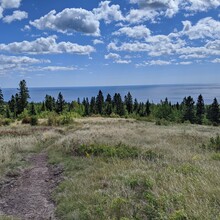 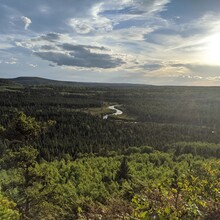 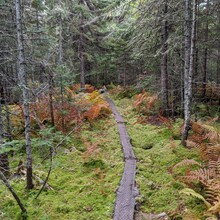 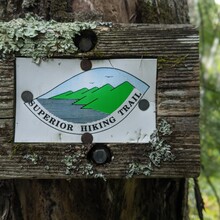 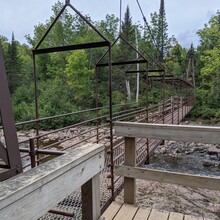 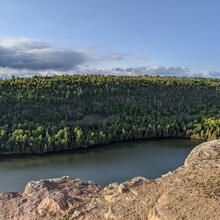 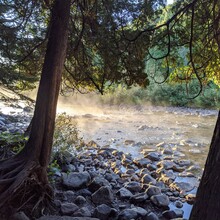 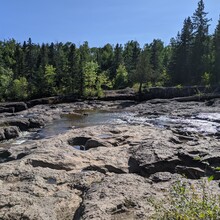 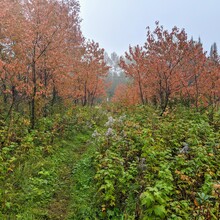 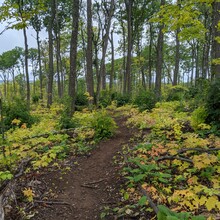 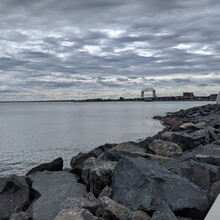 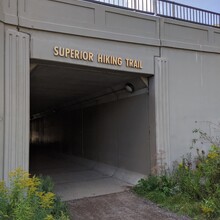 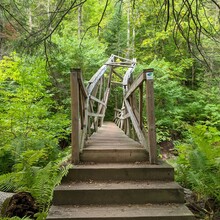 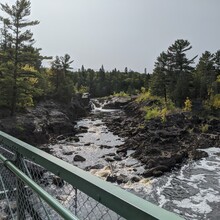 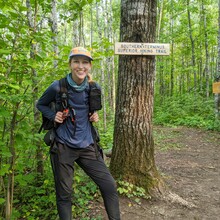 Katherine Baird from Chicago, IL completed a thru-hike of the Superior Hiking Trail in 10 days, 8 hours, and 40 minutes. This trip was unsupported, meaning no resupplies, no food drops, no town visits, no outside support or aid of any sort, and water gathered from natural sources only.

Google Photos Album with pictures and video of the trip: Click Here

The day started off with clear skies at the 270 degree overlook, but then I quickly encountered lots of marshy and overgrown sections of trail. I was also speedily introduced to all the lovely rocks and roots as well as the many wooden bridges/walkways the cover the path. After stopping at Hazel camp at the 20 mile mark, I ended up slipping on one of the wooden planks.  I fell and landed on my kneecap, and ended up hurting my right wrist as I went down. I later taped it up with athletic tape, but my wrist would have a slight sprain during the whole trip. The day ended with a bit of road walking and going through Judge C.R. Magney State park. I night hiked and heard wolves howling(!), and arrived at a pretty full campsite.

The morning started with a walk along the rocky shore of Lake Superior. It was beautiful and a bit challenging, and afterwards the trail returned to the forest and followed along Kadunce river. I met several other SOBO thru hikers as I took at break at noon by Durfee Creek bridge after hiking 11 miles. After passing Devils Track Falls, the trail was all stairs and later a long wooden walkway through the woods. There were lots of day hikers because of the holiday weekend. I arrived at Pincushion Mountain trailhead by 4pm, took a break, then hiked the final stretch to the campsite which seemed to take forever. I was pretty exhausted by the end of the day due to not sleeping well the night before.

I was determined to sleep well so I allowed myself to sleep in a bit. The trail had lots of downed trees to climb under and rollercoaster hills. As I went through Cascade Falls State Park, I found the trails to be a bit confusing, and I think I lost some time/miles going on spur trails and then doubling back. There were some lovely overlook points today, and some fantastic campsites on lakes. Again, the trail was full of section hikers and day hikers because of the holiday weekend. By the end of the day I was fairly sore and my feet had started to ache, but no blisters yet.

I went through several state park areas and past Lutsen, Oberg, and Leveaux mountains. After passing through a forest with a super smooth trail that criss-crossed bike paths and snowshoe paths, I climbed past Carlton Peak, and then into Temperance River State Park. It was a really gorgeous park and the path followed the water, but it was also pretty overcast at the time. After taking a break at the park, the trail darted back into the woods where I continued to hike past sunset. I relied pretty heavily on my headlamp, and arrived at camp located off a long spur trail. No one was there, and I was a bit spooked as I set up my tent.

This was a really tough day for me. The trail was full of rocks and elevation ups and downs, and there were some pretty gnarly rock scrambles. I took a break at mile 10 and chatted with some section hikers, then continued through the rest of George Crosby Manitou State Park. There was a short road walk and then an incredibly mind-numbing walk through forest.  There were roots and rocks galore, and I couldn’t manage to get up to speed. I walked past a few nice sites (including Lilly’s Island), and was planning to do 25 miles for the day. However a sign at a trail head noted that Leskinen Creek camp should be avoided due to a bear managing to get food down from the bear line. It was too late in the day to go to the camp after that (I couldn’t bring myself to night hike again), so I went off a spur trail and found a campsite near the Lake County Road 7 trailhead.

It dropped below freezing the previous night, and my tent was frozen. The trail that morning had me walking across 2 different bogs on some questionable bridges. The trail then continued its rocky rollercoaster theme all day and led to a number of scenic overlooks. I stopped at the Sawmill Dome, and the trail went past several more overlooks after that. I stopped at the waterfall at Tettegouche State park to get water and to back flush my Sawyer filter. By that time, I was incredibly thirsty as I had very little water all morning.  By the late afternoon the sun had finally come out which cheered me up a lot.  I enjoyed a really nice sunset walk along the crest by Bean and Bear Lakes. The trail then winded through a burn area, and I had to break out my headlamp out for the final few miles.

Today was a weird day. It started off with walk along the Beaver River and I made the decision to continue the hike unsupported with no resupplies. (I had packed 10 days of food, but was about a day behind mileage-wise. I took stock of my food the previous day and decided that I make it last another day or two.) The trail was rocky with its ups and downs until it hit a dry, hot, flat section though a burn area. Then it continued along the path of former logging railroad. The Split Rock Bridge was out, and the trail signage warned not to cross the river. So I followed the reroute to the Gitchi Gami, then returned back to the SHT for several miles before being rerouted again via Blueberry Hill Road. Gooseberry Falls Park was incredibly beautiful, and after that the trail was mostly flat (other than Mike’s Rock) and followed the river to the camp at Crow Valley.

The morning was rough. The first 6 miles were full of rocks, roots, and scrambles up and down which slowed my pace considerably. I did a few stream crossings, and by 11am I had hiked only 8 miles. After noon I hit a flat section and did some road walking before returning to the woods for some mindless twists and turns. The path cleared a bit for the final 12 miles or so and I actually managed to do some trail running! By the end of the day, my feet and legs felt completely dead, but I felt fairly accomplished.

It rained the previous night and was misty and wet all day. My shoes and socks were soaked through and I managed to get my feet covered in blisters. The trail kept weaving though new growth and old growth forests. For the newer ones, there were signs noting what year they’d been harvested for timber. The afternoon brought easier terrain, and the trail sometimes coincided with some larger ATV trails. No one else was at the Bald Eagle campsite, which is the last official SHT site before Duluth.

While walking to the Martin Road trailhead, my mostly dried socks and shoes managed to get completely soaked again. This section of the trail was a bit strange- it was a disjoint, mish-mash connection of trails in the Duluth area. I actually lost the trail several times going from one junction to another, as there often weren’t clear signs. I relied really heavily on Gaia all day and managed to drain my phone battery fairly quickly. Chester Park and Enger Park were both quite picturesque, but I can’t say that I enjoyed going through downtown Duluth or crossing under the various highways. I ended up night hiking past Spirit Mountain and camped near the spur trail to the Magney Snively trailhead. Both of my external batteries had run out of juice by the end of the day.

The first 4 miles or so were fairly tough and slow as I hiked past Ely’s peak and scrambled down rocks on the face of the hill. After that, the trail entered proper wilderness again and it was actually really enjoyable. The path smoothed out and I was able to jog for a few sections of trail. Jay Cooke State Park was really beautiful and peaceful, and it was such a relief to see the first sign for the park. There were lots of day hikers near the visitor center, but the crowds thinned out as I neared the Wild Valley Road trailhead. The final two miles of the trail are adjacent to a recreational hunting area, and there was periodic shooting as I finished the trail. I crossed into Wisconsin and reached the Southern terminus at 4:16pm!