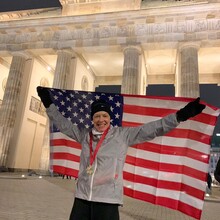 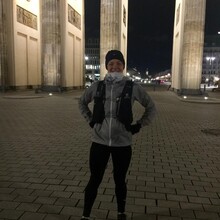 Many of you know that I like to celebrate my birthday with a big run. Depending on injury status, it could be 45 minutes, or 42k, or whatever happens to correspond to my age in years. This year I decided to go for double or nothing and run 100 miles! Conveniently, the Berliner Mauerweg (Berlin Wall Trail) is just about 100 miles and very convenient!

I decided to do this during the Christmas/New Year Holidays. With travel restrictions unpredictable it was better to stay close to home. Also, I was able to recce the entire route by taking public transport to various stages. Winter training for an ultra was something new to me (Winter 2019 was extremely mild) and figuring out how to train for 100 miles in March was a bit tricky. So I just ran.

During the recce runs I took time to stop and read some of the memorials and historical sites commemorating The Wall. Some of them honored the people who died trying to cross, some described underground tunnels, others described churches or other historical sites. Of course I ran along the East Side Gallery, through Mauerpark, and down Bernauer Strasse. What a wonderful way to learn more about the history of my new home.

As soon as I decided on this project, I knew I wanted to make this a Fastest Known Time (FKT) attempt as there didn’t appear to be any entries on this route to date. I also wanted to do this route in the self-supported style. This is kinda crazy because it would be SO easy to have support along the way. The flip side is that it is less likely for someone to snag the self-supported record when the supported style is relatively convenient and hopefully my record will stand longer. For clarification, the self-supported style is when someone runs solo, with no planned help from outside, but I am allowed to access any support I can find along the way. In my case I stopped at petrol stations and vending machines.

I started about 8p on 5 March at the iconic Brandenburger Tor (Brandenburg Gate). It was necessary to do this on Friday/Saturday because hardly any shops are open on Sundays in Germany. Also, I wanted to relax on my actual birthday.

There’s not much to say about the run except I had a couple of novel experiences. I had never before been offered drugs during a run. But what did I expect running through Gorlizter Park after dark?

Another time I took the wrong turn because in my hypothermic mental cloudiness I followed the sign and not my GPS or intuition. I remember thinking, weird, I don’t remember this on my previous run… and it was because I wasn’t supposed to run that way. I probably went 2k out of my way and back again… ugh!

I knew it was going to be cold (-5C) but my reasoning was to underdress a bit to motivate me to keep running to stay warm and not overheat. But that wasn’t so smart as I didn’t reckon about doing this for hours and hours. I should have brought another top layer. The cold drained a lot of my energy just trying to stay warm. Lesson learned.

It’s hard enough to eat when you are running for so long, but it is even harder when your frozen fingers can’t open the packaging or chew the frozen bar or drink from your frosted water bottle. How do they manage in those Yukon races?!?

Even though I thought the wheels were falling off, they were really only wobbly at times. I stopped to sit only twice (once to fix a potential blister, once to refill water bottles). I was never in a foul mood or deep funk and I never considered giving up. I was miserably cold, exhausted, and a bit disappointed that I wasn’t going as fast as I had hoped, but I had no real reasons to stop and I didn’t want to stop. I just wanted to be done! I think it helps to be a bit demented in an ultra because a person in their right mind would probably quit.

As I got closer to central Berlin, the energy started coming back because I could get my head around the relatively short distance left to do. I was getting closer to home. I knew the way. It wasn’t so far now.

Finally, I crossed the Spree and the home stretch past the Reichstag and I could see the Brandenburger Tor! I started shouting – my friends were there! Time to celebrate!

Those of us who run ultras know this feeling of questioning motives in the middle of an event: Why do I do this to myself? I swear this is the LAST time! Then the next day we pick up Ultrarunning Magazine and start dreaming again…