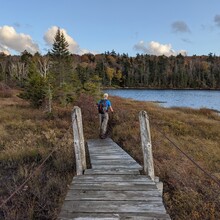 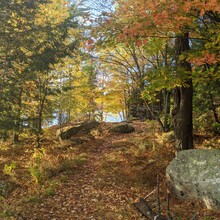 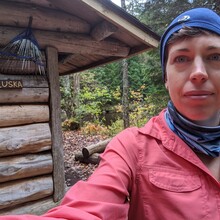 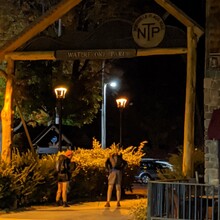 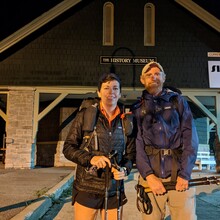 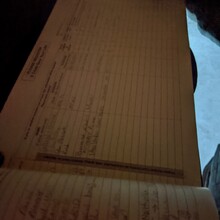 We began at the old train station in Lake Placid at 5:26 AM on Friday October 2nd, and headed southbound on the Northville Placid Trail. We carried all of our own gear and food, only taking water from sources on trail. During Day 1 we made good but not great time, walking down Averyville Road to the trailhead, up to Moose Pond Lean To, down through Duck Hole, along the Cold River, and over to Long Lake, where we had a nice surprise when some thru-hikers who had been tracking our progress cheered us on! We made it out of the Long Lake section of trail just as the sun was setting and hiked down Tarbell Road, crossing 28N and back into the woods. We stopped briefly for lunch on the side of the trail before continuing on, up and over the high point of the trail, and eventually down to Tirrell Pond. There was already another group staying at the first lean to, so we continued on to the O'Neil Flow LeanTo and set up for a few hours of sleep. This concluded Day 1.

Day 2 started with an alarm wake up at 4:30AM, but it took us about an hour to pack up and get going. We made good time out to the road crossing of 28/30 and through Lake Durant Campground. Day 2 included hiking through to Wakely Dam. To our big surprise, the area that had been previously flooded by beavers near Carry Lean To had been drained the day previously, and it was a nice surprise to be able to walk through in our shoes without getting wet or muddy! We were still feeling pretty good making it through the West Canada Lakes region in the late afternoon, before dark hit on our way to the Spruce Lake Lean Tos. We stopped for a quick dinner at Spruce Lean To #2 before pushing on through the night. It got really cold, and boards were slick with frost. We ended up taking only two naps, one for 5 minutes and one for a hour on trail, before eventually reaching Piseco around 2am.

Day 3 was really just a continuation of day 2, as we didn't stop. We had also only planned for a trip taking a little over two days, and so our food was running low. Once the sun rose, our spirits were lifted and we made good time for a bit on our way to Mud Pond Lean To, before hitting a really slow section of blow down. We worked our way through that and continued on - we were in the home stretch now with around a 50k to go. These last 30ish miles were long and slow, and some sections had significant elevation change. We kept a slow but steady pace, trying to get out of the woods by dark. We barely missed this goal, exiting the final trail head in Northville at 6:47PM and starting the 3.5 mile road walk into town to finish the trail. We were so tired that it was hard to keep up a good pace, but eventually perservered and finished at the NPT arch in Northville at 8:10PM on Sunday October 4th.

Our total time is 62 hours 44 minutes. The entire attempt was unsupported, only taking water along the trail.