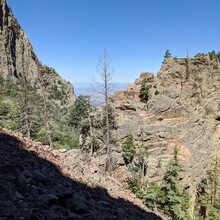 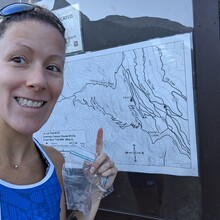 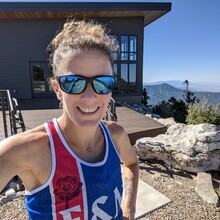 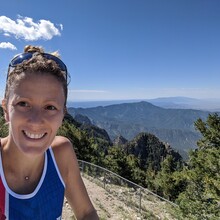 I hope this counts:  I ran the FULL La Luz trail to the tram house, 7.5ih mi as described in the narrative.  I originally thought it was to the crest, but there's a race on that route and no one had posted an FKT yet...hm....  The GPS track also includes my run back to the intersection with the spur trail, up to the crest, then back down to the trail head.

I started at the La Luz trailhead on Sat Aug 8, 2020.  Trail in the morning is shaded by Sandia Crest and was cool and enjoyable.  The first third is very runnable, then hit a section of switch backs over scree that slowed me down.  I hit the junction of the spur trail and deliberated which way to go to get the FKT and chose to stay on La Luz 137 to the tram.  The final mile to the tram is smooth. Refueled at the tram for a few minutes then headed back.  Got a bit toasty on the way down.

I cropped my final time to the when I hit the pavement/walkway of the tramway driveway.  Photos from the tram house and later the crest.