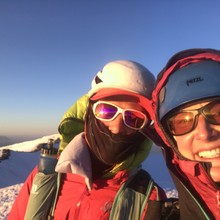 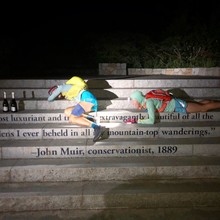 This was such an incredible experience and we are grateful to Chad Kellog for dreaming up such an insane route. We want to give a shout-out to all previous finishers of the RIL - y'all are badass!

Alex and I left the Muir Steps at ~9:40pm on Thursday July 25th to start the DC route, with the goal of going after the current overall FKT (Jason Antin and Erik Sanders). We successfully climbed the DC and descended the Emmons, running the Wonderland Trail clockwise and returning to Paradise at 11:18pm on Friday July 26th. We again left the Muir Steps for summit attempt number 2 at 2:48am on July 27th, ascending in a whitheout only to find as we climbed higher that conditions on the upper mountain were deteriorating (sustained winds >70mph at Camp Muir, whiteout, etc). We made the difficult decision to turn around at 6:39am on July 27th, just below Camp Muir. At this point we expected to call the rest of the attempt off, but kept our inReach tracking until we finalized our decision. We descended back to our car returning to Paradise at 9:01am, and within a few hours decided to give the summit another attempt after weather cleared. We spent the next few hours drying out our (soaked) gear, repacking, and making arrangements to delay our estimated finish time by a day. We left the Muir Steps for the third time at 8:30pm on July 27th, found much better weather and a very crowded weekend DC route, but reached the summit at 8:03am on July 28th. We descended via the Emmons again finding the route much more crowded than our first descent mid-week, but reached our car at White River at 3:34pm. We spent a few hours eating and resetting before the final section of the Wonderland Trail. We departed White River for the counter-clockwise section of the Wonderland Trail at 6:53pm on July 28th. The cumulative lack of sleep hit us hard on this final section, and we enjoyed some midnight bivy cuddles in the middle of the trail that night. We finally reached Paradise for the final time, completing the loop at 1:44am on Tuesday July 30th.

The real crux was having us both back at work within 6 hours of finishing.