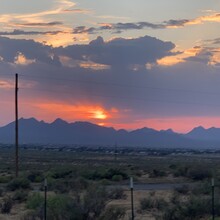 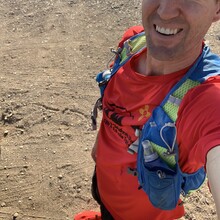 I had been planning on running to Aguirre and back for a while because of all the Strava segments I was only missing the KOM for this one and the run up to Baylor Pass (the first 3.5 miles of this run).  I wanted to do a fast run to try to get the over and back FKT and also because I had bought some Salomon S-lab sense 8 shoes for a few races that were all cancelled due to COVID.  It was a really hot day but a good day for me because I was leaving out of town and would not be able to do any fast runs in the near future.  I carried 1.5 liters of water and used 1 liter of it.  The climb was really hot so I started slow but as the sun started to set it cooled down and became much more enjoyable.  I was surprised to see at mile 3 that I was really close to the record up to the pass so I picked it up a bit to see if I could get it but didn't want to destroy my ultimate goal which was the 11 mile over and back.  I ended up missing the record for the time to the top of the pass but was feeling really good about the FKT for the over and back.  The downhill into Aguirre was very enjoyable - it is a great trail that is difficult but runable.  The route crosses the paved road once into Aguirre and then heads back.  I crossed the road at 53 minutes and at that point I knew I had the FKT as long as I didn't take a wrong turn or something crazy on the way back.  The climb back up to the pass was also fun as the temperature started to drop as the sun was setting.  After the top of the pass I check my watch and was feeling very good.  I had planned to switch out one of my water bottles at this point but didn't need to and I didn't want to stop to unzip and remove it so I finished without using it.  I always love the run down to the parking lot from Baylor.  Because of all the turns and rocks it makes me feel like I am running a lot faster than I really am.  I finished the over and back segment on the Strava in 1:39:16: total time includes the run into the parking lot so records at 1:39:29.

This is a pretty incredible feat. Well done!