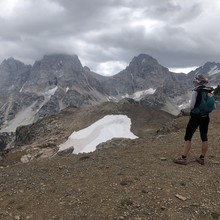 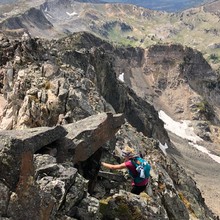 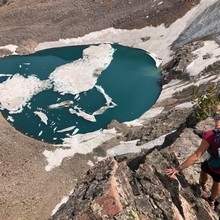 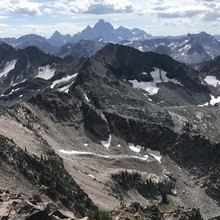 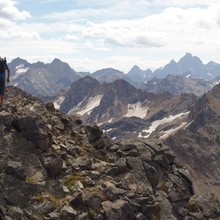 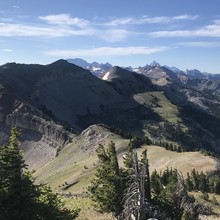 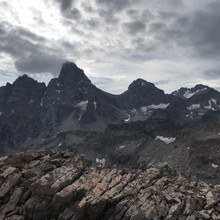 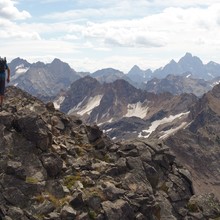 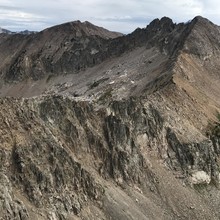 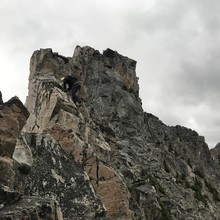 We wanted to stay as true to the ridge as possible, although due to large cliffs, the ridge must be dropped and gained off and on as you traverse. We had some navigational issues around Green Mountain and after realizing the ridge could not be cleanly linked, we dropped off and gained the ridge again before Littles Peak. We had planned to hit the Wigwam traverse during daylight as it's the crux of the route, but because the northern half of the route was significantly more technical than we realized, we did not hit the Wigwams until close to midnight. We ran into more navigational issues and rainfall halfway through the Wigwams and after 5 attempts to find the correct route in the dark, elected to take shelter for 2 hours until we had enough daylight to continue. The remainder of the route from Table Mountain to Teton Pass is much easier to navigate and is mostly on trail. It should also be noted there was almost no water along the ridge.

"Done and done. A center punch through the middle of the Tetons. Hardest linkup I have ever done and longest push. 70 miles with around 22k vertical gain following the divide of the Teton Range from Glade Creek/Berry Creek to Teton Pass. We tried to stay as true to the divide as possible, although we had to drop off the ridge in a number of places when it did not go. Multiple cruxes included 50% off trail travel, a LOT of technical climbing (occasionally on wet rock in the dark), very little water on the northern half of the route, rain, wind, fog, shivering through the night, difficult route finding, and sleep deprivation. We began at 3am near Yellowstone, followed the center line of the Teton Range along the divide, linked to the Teton Crest Trail at Hurricane Pass, and finished by descending off of Mount Glory at Teton Pass 43 hours 29 minutes later. As of right now my partner Fred Most and I haven’t been able to find much information on this linkup other than it might be a more ridge dedicated version of Petzolt’s High Adventure Route but if anyone has info, please let us know! I have the route on my Strava account if anyone wants more details. Incredibly grateful for my friends and family for following along, my coach @kaseymclark for kicking my ass, my sponsors @lasportivana @ospreypacks @nativeeyewear @spot_llc @avalon7 @medicinewheelwellness and of course Fred C. Most for being a kick ass partner on this very grueling and intense route! Thanks bud!???