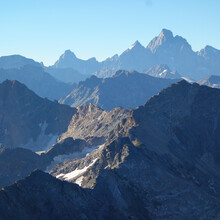 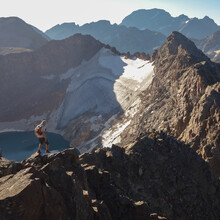 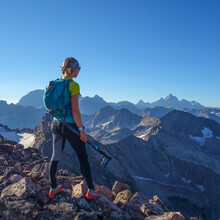 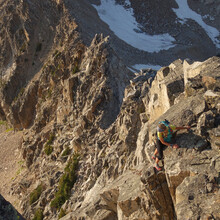 Round two on the Teton Center Punch traverse! This year we finished in 37 hours 29 min of non stop movement, taking our time down by 6 hours from last year. The route is about 70 miles with 23k-24k feet of vertical gain, 50% off trail, and a ton of VERY adventurous ridge scrambling along the Teton hydrographic divide. We are guessing the crux sections go at a scary exposed 5.6-5.7 rating in the Wigwam traverse north of Table Mountain. During this attempt we honed in on the route finding and made a few variations from last year. One variation was between Doubtful Peak and Green Mountain (?) where we stayed much closer to the ridge before dropping off on the west side and gaining the divide again before Littles Peak. We have future plans to eventually go back to the ridge after Green Mountain to see if there is a way to stay on the divide. As of now it's one of the few sections where we feel it is safer to drop off and regain before Littles. Personally I wasn’t feeling 100% on this go (probably still tired from the Wind River Route FKT?) on top of not getting enough sleep before our 9:20pm start time. By the time we finish the route I think Fred and I had both been up for over 50 hours. Overall I think we could have been moving much faster if I had not been so tired, but the route went pretty smooth besides the slow pace. I accidentally paused my watch somewhere around hour 25 near Table Mountain for almost three hours before I realized it so my Strava information is off. We started at 9:21pm on September 4th 2020 at Glade Creek (Berry creek) Trail Head near Flagg Ranch and ended at Teton Pass just before 11am on September 6th 2020.