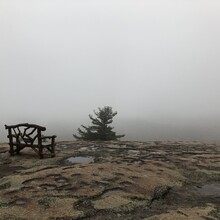 What a beautiful route!  Though I’ve run a few of these peaks before, almost all of the trails on this loop were new to me. Many have changed since I ran them years ago.  I’ve always wanted to run all the peaks in the park, and this loop is a beautiful route to connect them all in one go.  Though the weather was mild during my run, trail conditions were disappointingly slow. Fog obscured summit views but also trail blazes, and wet leaves and rocks made it difficult to keep my eyes up and looking for the blazes. I overshot multiple turns and at times found myself running down old trails that were not shown on my (outdated) paper map or on Gaia, but each time I turned around to get back on the proper route.  At times it seemed I was stopping every few minutes to check the route on my phone. As Elise and John noted in their write-up, some of the turns between Timp and Dunderberg are particularly tricky, including an unmarked connector trail. They also noted the lack of water sources—this was true even in very wet conditions. I was surprised to finish this within a minute of the fastest women’s supported/team time—there’s definitely plenty of room for improvement here! Cooler temperatures, dry trail conditions, less leaf cover on the ground, and route familiarity would make for much faster running. While having a second pair of eyes to aid in navigation would be a particular advantage on this route, I’m not sure why there aren’t more solo times posted.  This route isn’t overly long, is not particularly remote, and is not overly rugged (there were no treacherous sections or scrambles in which I felt unsafe at all, even in the wet conditions), making it well-suited for solo efforts.