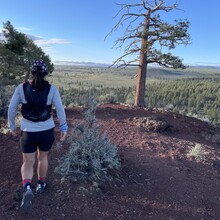 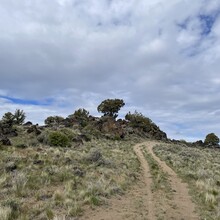 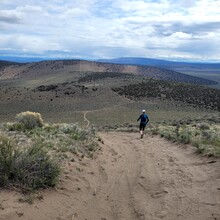 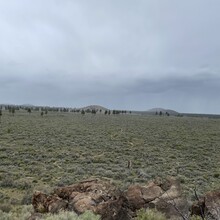 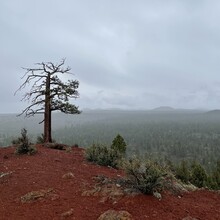 Yung Hae and I saddled up at 6:30am under partially cloudy skies, 41 degrees. We each carried 2-2.5 liters of water with around 1,200 calories. The route connects Horse Butte via a long stretch of flats to two Horse Ridges. Very runnable except perhaps the climbs up to the peaks. There are enough sneaky rocks on the trail to keep you on your toes, but it is fairly non-technical.

The course immediately took us up/down Horse Butte, a short, steep, loose rock trail. Once on the flats it took a while to get into a groove after such a rude awakening to calves and quads. It was a beautiful morning with vast views all around. Birds were chirping and we tried to make out the animal tracks on the trail (fox perhaps?).

Unfamiliar with the trails, we had navigation downloaded to watches and phones. The route isn't particularly complicated, but the intersections are not marked beyond the first part of the course. A barbed wire gate was a surprise around mile 10. We squeezed through an opening. There were maybe 5 or so gates encountered on the course.

The climb up to Horse Ridge #1 was a beast. Incredibly steep and sandy. Once on the ridge, it was a short trot to tag the tree that marks the highpoint. Looking North we could make out the concrete pad marking the ascent to Horse Ridge #2. We descended. A couple miles later through a stretch of Juniper trees we were at the concrete pad. This next climb wasn't as tough, but required some off-trail trekking through brush and rocky bits. We warned rattlesnakes of our ascent while navigation helped us find Horse Ridge #2. We dismounted the ridge and started our way back across the flats back to the start. We chatted a bit with a lone mountain biker who wondered how we got out there.

Generally speaking, clouds had been rolling in as the day went on keeping the temperatures under control. However, for a long stretch on a jeep road the sun blasted down, roasting us. As others have noted, there are no natural water sources and the course is completely exposed to the elements. An off-road vehicle pulled over to the side as we passed. Friendly hellos all around.

Rain showers started 3-4 miles from the end and the temperatures dropped. We pulled on our jackets. Being closer to the parking lot, we crossed paths with a few mountain bikers and runners. Soon we were back at Horse Butte. Giddyup! We made the final ascent up to the Butte. Sleet bounced off my phone as I took a few final photos. What a dramatic change in weather from that morning. We slid back down the Butte to the parking area clocking our elapsed time at 7:12.