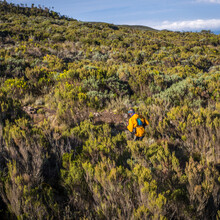 This is for the men's unsupported record.

I attempted the fastest time running up and down Mt.Kenya’s summit from the Park’s main gate. The entire distance came to 49.2KM, and I did it in 7hrs:00min:40sec. For most of the ascending on areas without snow it felt like the challenge I expected. A couple of falls, slips on the wet grass, and water breaks. The ascent was a bit tough from the foot of the hill. I had done reconnaissance to understand the route. However, there were extra layers of snow. It was almost my knee height, and that added an extra layer of difficulty. Additionally, I struggled with the paths a bit as the landmarks I had in mind were mostly covered in snow -most of the hills looked similar.

We were 2 men and a lady making the attempt. While we started off at the same time, everyone took their position along the course depending on their ability. I was ahead of my two friends the entire time and only met on my descent from the summit after getting a bit lost on the way. I got lost for about 1KM. The entire time, I only got hydration from what I had packed at the gate. I think I did hydrate well at least two days to this attempt. Had no plans for food or water support along the course.The plan was to eat well the night before, and later after the attempt. Nothing along the course.