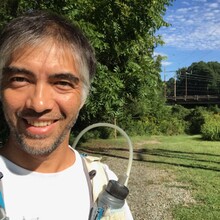 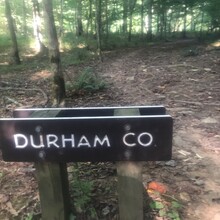 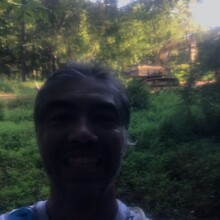 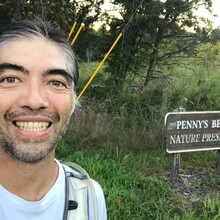 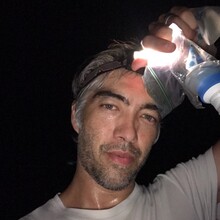 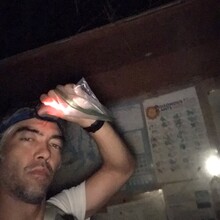 This year Segment 10 of the MST has been somewhat of my nemesis.  In January, I failed to finish Segment 10 in a first of a kinda unsupported FKT, in March I DNFed the MST100, and in April while attempting a 145 mi run through the Triangle on a path of my own design, I dropped out 116mi in at mi 50 of 66 on Segment 10 of the MST.

Today, I finally turned the tables and got it done.  Like last time I did this as a bit of a last minute run.  I have a 24hr race coming up in November and I wanted to use this run to get me some overnight running experience as well as work on holding back at the beginning of a (really) long run so that I can still be running at the end.

My wife dropped me off at the Pleasant Green Eno River access parking lot around 4:20pm.  I did one last gear check, and adjusted my heavy (10.6lb) pack and set off at 4:29pm.  I started out carrying one liter of Sword mixed in two 500ml body bottles and 2L of water in my bladder and my 1L BeFree water filter for refills.  I also had two 5oz gu bottles with non-caffinated gu, six packs of caffeinated gus, two cosmic brownies, and four mini Slim Jims plus a little baggie of salt tablets.

The temperature at the start was in the mid-80’s and humid, but was expected to fall starting at 5pm to a low of 65 at 5am.  My goal to start was to keep my hear rate under 140BPM at least until the sun went down and hopefully all night long.  I was mostly successful at the first part with a few spikes while walking up steep hills and my average pace was around 11:40 min/mi.

When I reached Penny’s Bend I climbed down to the water and filtered 1L into my bladder and filled the BeFree bottle and tucked it into my pack still full.  I carried on and the sun set while I was still working my way over to Red Mill Rd. (around mi 17 or 18).  I pulled on my head lamp and kept on going.  Pretty quiet and uneventful until about mi 25.2 when I came across a Durham Country Sherriff parked right on the trail in what seemed like a makeshift jeep road.  He asked me some questions and once he figured out I was “just hiking” he let me go.  I didn’t really ask any questions about why he was there but I got the impression he and his colleagues were looking for someone.

I then finished up the two miles to the Hickory Boat Ramp (~27mi).  I filled all my bottles while I was there and the weight of the 4L really started to slow me down.  That coupled with it verging on my usual bedtime and my headlamp starting to dim caused me pace to slow pretty significantly.  It wasn’t until I switched to my backup light a little after midnight that I realized how dim my first light had gotten.  The new light was so bright, I woke up a bit and started running again.

Not much to report for the next few hours, just running in the dark, clicking off miles.  I stopped again at the Shinleaf Campground bathroom to re-fill my water (~53mi).  I also rinsed my arms and face off in the sink.  It was very refreshing to be free of some of the salt grime. At this point all I had remaining for nutrition was my caffeine gels and a few squeezes of uncaffeinated gel left.

By that point it was only about another hour and a half until dawn.  I was hoping that the light would pick me up a bit otherwise I’d be looking at an 11am or noon finish.  Like I hoped the sun did indeed pick up my pace, it was easier to navigate the trail seeing the roots as well as the upcoming slopes (uphill/downhill).  Once I started eating the caffeine gels my running pace was my fastest it had been at any point in the run, however, I did still need the walking breaks on the climbs.  This had me putting down a 12-13 min/mi pace.  Based on this improved pacing I had a chance to get in before 10:30 and under 18 hours total.  So I worked hard the last few hours to maintain my pace in this range.  Spacing my gels so that I’d have enough to make it all the way with without burning out.

Towards the end I wasn’t exactly sure how much mileage I had left, but based on prior runs in this area had me concerned that if I was off by even by half a mile, I might not make my new time goal.  This uncertainty pushed me to drop my pace even further to buildup a little buffer.  Adding 30s-2min at a time.  Eventually, I had enough buffer for an extra mile.  I also knew that if worse came to worse, the final stretch is downhill and I’d be able to really push the pace.  Ultimately, the distance came out slightly less than my estimates and I was able to really fly on the downhill.  I finished in 17:42:10.

I was so glad to have finally finished this.  It was frustrating to have been stymied by this trail for so long.  But I was exhausted, I ended up waiting for my ride on some of the large rocks lining the parking area.  I couldn’t even muster the energy to get up and take a proper finish line photo.  (I also ended with 1 extra liter of water in my BeFree so I carried over 2 extra lbs unnecessarily the last 23 mile).