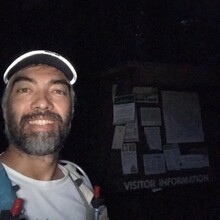 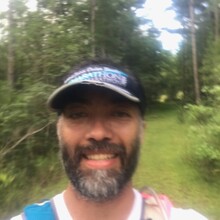 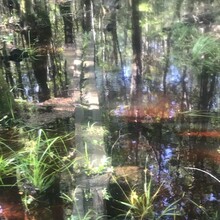 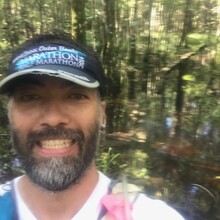 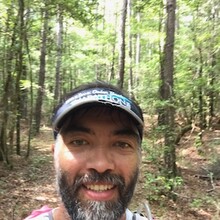 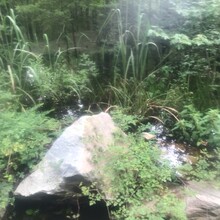 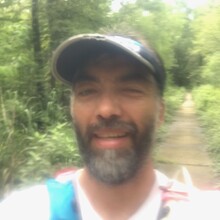 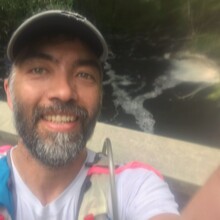 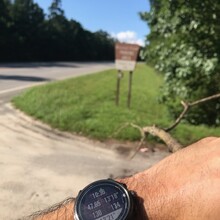 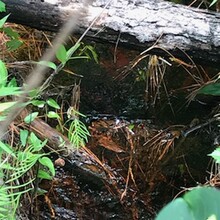 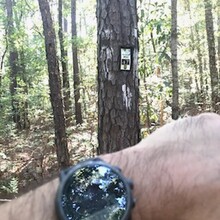 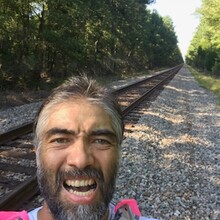 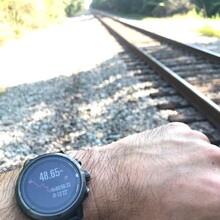 So one thing I noticed is that on the Palmetto Conservancy they show the trail terminating at the train tracks about a mile past the Rt52 trailhead parking lot (https://palmettoconservation.org/passage/swamp-fox-passage/).  Personally, I think crossing Rt52 is very dangerous and it would be a much safer route to end at the parking lot like the other runners did which would make the total length about 46.7mi.  My time to the trailhead parking lot was 10:35:53.

I started the morning at the Awendaw Swamp Fox Passage trailhead parking lot at 6:27am (about 20mi before sunrise).  The bugs were pretty terrible, but once I got running the mosquitos didn't bother me much but the horse flies were relentless.

I’m glad I started later than I hoped because the trail was COVERED in spider webs, but in the early morning light I could sometimes make them out at the last second.  The second or third web, I took my visor off and saw a yellow orb weaver spider crawling across the bill and panicked and threw it in the woods.  Went over and retrieved it then carried on.  The webs were so thick and constant, I ended up carrying spider sticks in front of me to bear the brunt of the webs.  I probably carried a spider stick for at least 60-70% of the run.

I had loaded up on fluids to start my run, with 2L of water in my bladder and two 500ml body flasks of sword drink.  After doing some research I knew the first non-brackish stream I could filter water (Turkey Creek) was 18mi away.

At Turkey Creek, I refilled my two body bottles and filled my BeFree water filter and stuck it in my pack.  I noticed I had stopped sweating so I drank up and started sweating again.  This would be the theme of the day, balancing water usage vs supply.

Around 11am and ~23 mi into the run, things started to get really warm and I was reduced to a shuffle run with mostly walking.  More running than a hundred meters and I’d start overheating.  It was not fun.

The next place I had planned on refilling was Nicholson Creek(~25mi).  This was a high bridge so getting down to the water would have been tough.  There was plenty of water here, it was rushing under the bridge but I skipped this location.  I nearly regretted it.

The next location was supposed to be Little Hell Hole Bay (31.2mi) which I thought with the recent rains would have been the best location for water.  However, the area was quite dry with a few stagnant pools that did not look inviting.  I was running out of water since I didn’t grab any at Nicholson, but fortunately I found a small stream (Alligator Creek) to fill up my bladder and the BeFree.

Based on my math, I’d thought I might be able to parlay my run/walk deal into a 12 min/mi average, but things just kept getting hotter and more muggy.  After my stop at Alligator Creek, I was down to about a 90-95% walk. And by mile 34, it was 100%.  I knew a 15min/mi walking pace would get me to the finish in time but it would be close.

At Cane Gully Branch, I had planned to stop for water, but again the bridge was very high and would have required a lot of work to get down to.  The water was moving fast and there was plenty there, but I decided to skip it.

My last water stop was supposed to be Waboo Creek at mile 43.5, however, I don’t know if that was where I actually stopped.  The last stop was just in case I ran out.  I thought I could make it with what I had already, but I didn’t want to risk running out.

From there, I knew I was in the home stretch, but it was getting really hot.  It was a real struggle to maintain my pace.  I was taking gels every 2 mi and an electrolyte tablet every 3ish miles all washed down with water.  Finally, I made it to the trailhead parking lot in 10:35:53.  I would prefer for this to be my time as I indicated, crossing rt 52 was really sketchy (4 lanes with a 60mph speed limit – no light).  I managed to get across and got turned around a bit but managed to make my way down to the train tracks.

Then I had to trek back to the Rt 52 parking lot and cross the road again.  It was a long hot day, when my wife picked me up at the trailhead she said the heat index was 107F.  I believe it, in the short stretches in direct sun it was quite hot.  Fortunately, there is quite a bit of shade on the trail but it was hot nonetheless.  While there was plenty of standing water all along the trail (feet first got wet at mi 2.82 and stayed that way the entire day) it wasn’t nearly as bad as I expected given the rain the area got from Tropical Storm Fred.

I fortunately did not see any snakes or bears.  I did see some bear scat, so I spent a good portion of the day whistling periodically.  I did see a turkey and it’s chick, 3 dear, and some baby turtles living in a pool on the trail.  I only heard hunting dogs once and gunfire once but both were off in the distance.  I didn't see anyone all day, there were some tents at the Harelstons Dam site. The trail was pretty runnable, but the heat was a killer.  Attempting this in the winter would save a lot more time.  I don’t know if my filter was sufficient to protect me from the water, I guess we’ll see how things go the next few days.  But none of the water sources had a bad taste so that’s good.  Anyways, glad that’s done.

To follow up, I removed 2 adult ticks, 4 nymphs, and hundreds of larval ticks from my body after the run (not including the ones I removed during the run). I developed a significant rash on my arms and legs so I did go to urgent care a few days after this run. I was given a steroid for the rash and an antibiotic for the tick bites. I don’t know if it was absolutely necessary, but I did it to be safe. I felt no other real significant health issues from the run. (Rereading my post I want to make clear that I filtered ALL the water I collected while out there on the trail).