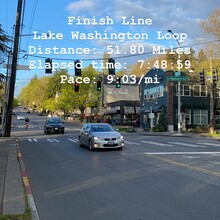 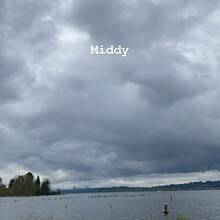 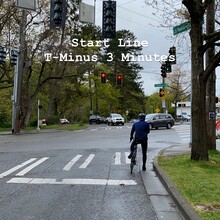 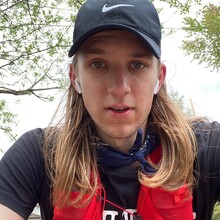 With Boston cancelled and the pandemic ramping up I had a good buildup of fitness and boredom to do something with. Some of my friends in my run crew (LURE: Lake Union Running Experience) primarily run around Lake Union here in Seattle. We call this "Flipping a U" and have always talked about "Flipping a W". Figured this was a good time. I ran a nice 1 mile warmup down to my start line (E Madison St. and Lake Washington Blvd E).

I started at 11:00AM heading North (clockwise) up through the arboretum and onto the Burke-Gilman Trail. I cranked for 12-13 miles up to Kenmore Air at the top of the lake and sipped on water and tailwind from 3 soft flasks I carried with in my S-lab 5 pack. I also had maybe 2 vanilla gus on the way as well. Water fountains were closed due to the pandemic so I stopped at the Subway on NE Bothell Way to refuel liquids via bottled water.

My original plan was just to hug Lake Washington as closely as I could, but I ended up missing the turn onto Juanita Dr. NE so I took my next right at Waynita Way NE. I continued on going mostly on shot blocks and tailwind and reconnected with my planned route at Jaunita Beach Park. Here I snacked on some banana bread I baked the night before (pro-tip) while moving along. I continued along South through Kirkland and used the streets of Medina to stay as close to the lake as a could.

I entered some real low points coming out of Medina, but got back on track by listening to some music. Once I got through Bellevue and past the last point where it would be easy to bail (I-90 bridge) I was in a good headspace, but knew I had a fair amount of running ahead of me. A little before this junction I stopped a second time at a gas station for a water refill and treated myself to a coconut water (pro tip #2). Around Mile 35 I found a nice spot on the side of the Eastside Rail Corridor Trail and sat for a few minutes to eat a mashed potato burrito to I packed (pro tip #3).

I picked up, carried on and moved nicely through the next few miles, rounding the bottom of the clock. This part was tough, as these portions of the route are pretty drab and industrial. Not to mention the fact that the Renton Boeing factory adds a good chunk of milage to round the bottom of the lake since their facility sits on the water. Either way I was more than excited to connect on to Seward Park Ave S knowing that if I could make it to the park I'd just be about 10k away from the start, a run I've done countless times and did enjoy the scenery of.

When I reached the park I took a minute or two to sit on a bench as my hip had started to bother me. With so little to go I willed myself up, threw on some dance music, and had one final Maurten gel with caffeine to get me to the finish line. Coming back to where I started nearly 8 hours earlier was pretty cool. I sat for a minute at the gas station, face-timed my parents to tell them a little bit about the day, and congratulated myself with an Orange Vanilla Coke. Then I hobbled the ~1 mile back up Madison hill to my apartment and took a nice epsom salt bath (pro tip #4).