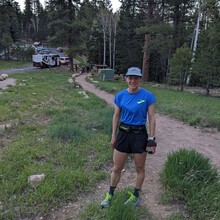 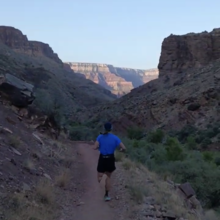 First time in the Grand Canyon and it was a beautiful day. We got lucky with a great weather day. I did R2R north to south via the Kaibab trail. I started just after 5:15am with Eric Finan. Eric ran with me until Phantom Ranch, but I carried my own water and fuel. After Phantom Ranch, I ran the rest of the way by myself. Just after leaving Phantom Ranch, as I started the climb, I had to step off the trail for about a minute to let a mule train pass. Then I settled into a steady mix of running and hiking the rest of the way. When I got to the south rim, I wasn't quite sure what was considered the official end of the route, so I ran around at the for a couple minutes trying to make sure I hit whatever was considered the end of the route before I stopped my watch. When I stopped my watch it said 3:14:24, the Strava segment for R2R North to South via Kaibab shows 3:11:51, and looking at my GPS file and Strava 3:11:57 appears to be where I was beyond the end of the trail. What an incredible place and a beautiful day! So many encouraging hikers and other runners along the whole route.