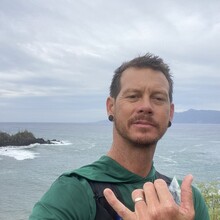 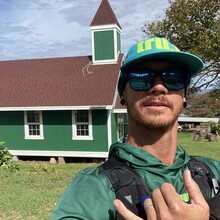 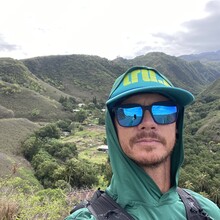 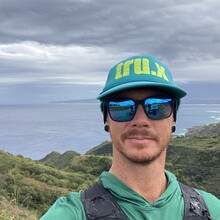 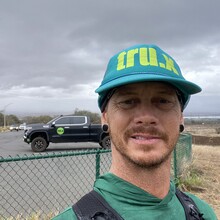 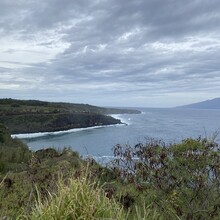 The West Maui Loop can be a deceiving run.  Not very far an ultra distance, and not too much crazy overall elevation, but a lot can change from the blistering sun, to downpours, to crazy wind.

This was my second attempt at the loop and first time completely unsupported.  On my first attempt, the road was closed halfway so I turned around.  I ended up doing 100k distance but not the actual loop.

This was also my longest unsupported run.  After completely underestimating the course and taking for granted the joys of having a crew, I will say I didn’t set myself up for the strongest finish.

First mistake was stashing all my drop bags.  I opted for longer distance, 3 bags every 15ish miles.  The reason for this was that I ran out of time the night before while I drove around in the dark 5 hours before I would start the run.  To be comfortable, I should of done every 10 miles.

Second mistake was to leave my stuff in a plastic trash bag, in the bushes, on the side of the road.  First 2 bags were safe, besides the ants.  Third bag got attacked by a rat or mongoose, which stole half my food.

I also ran out of water before reaching my 3rd bag and again before finishing.  I was desperately looking for a public water fountain for the last 3-4 miles.  I didn’t see any.

Not that it made a huge difference, but rather annoying, is that there is no phone service or internet for a good 20 mile stretch.  Good thing I downloaded a bunch of podcasts and audiobooks the night before...so I thought.  None of them downloaded.

As far as the running part, pretty straight forward the first 28 miles.  Mostly flat with some rollers on the Pali.  I started at 3:30 am to get a good start before the sun comes up.  My goal was to finish before nighttime so I made sure I got a good jump on it.

The rain was dumping the day before with thunderstorms forecasted all weekend.  I brought my jacket but only used it at the start.  It stayed cloudy for half of the run with almost no rain till the last 4 miles which turned into nasty wind.  (I’ll get to That later)

The course really starts right about mile 27.  20 plus miles of steep hills, rollers, narrow roads with no shoulders and lots of tourist cars.

My second drop, (plastic trash bag) was around mile 31.  No big issue except that I took about 15 minutes to get everything set up.  I had a change of clothes, my water refills, all my trash from the last drop and my food.

For whatever reason, doing it by yourself just takes way longer.  Having a crew hand you something that is ready to go, takes the thinking out of it.  I spent an hour of time not running due to bag drop stops and bathroom breaks.  Not to mention photo opts!  Really hurts your overall time.

My 3rd and final drop bag was about mile 43.  I ran out of water a few miles before and it was definitely getting hot.  But this was my favorite scenic lookout on the whole course!  An aid station with a view!

This is also where my treasure chest got raided by a rodent.  He went straight for my Kona coffee dark chocolate covered macnuts which I’ve been dreaming about the last 15 miles... What a dick!

Good thing I had extra food to get me through the last leg.  Because I was short on water, I was already thirsty and I knew I would have to ration the last section.

Coming out of the long decent into Waiehu, I was feeling pretty beat up.  I didn’t realize how much uphill there still was to get back to Ma’alaea.

My plan was to give the last 5 miles a solid finish.  That didn’t happen.

I was getting pretty dehydrated but the one comforting thought I could hold onto was that the wind would be at my back just pushing me gently towards the finish.

Of course that didn’t happen and it completely switched from the normal trade winds which decided to turn all its focus down the last stretch of highway at hurricane speed whipping me in the face with little stinging rain drops that felt like daggers.

Then I finished.  I got to the truck and gave a loud cheee hooo!  It felt awesome to complete the journey but also bittersweet.

No one there to give me a high five.  No music.  No sweaty hugs.  Just cars waiting at the traffic light watching a man take selfies on the side of the road.

So why do I run unsupported?  Because I’m not fast enough to get an FKT with a crew... and it’s a better story to tell later!

Excellent run!  I have good memories of living on and running on Maui.  Note: This is a self-supported effort, not unsupported (due to the bag drops); please request a change to the designation.  Thanks!

Hey Marcy - Craig from FKT; unfortunately users don't get pinged when a comment is left but I've noticed it and will make the appropriate correction. Thanks!

Dang it!  I guess I was a little confused on what category to put it in.  I thought it was unsupported because I’m the one who dropped off the bags the night before.  Truly unsupported would be the next challenge and very doable as there are multiple streams along the way plus a few public showers near the beach.  I will definitely have to attempt it. ??