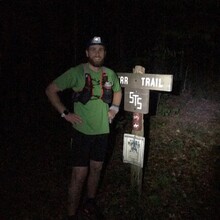 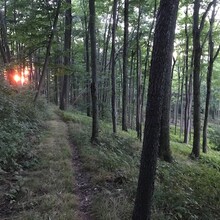 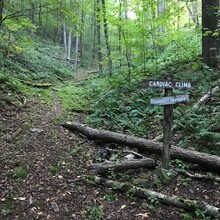 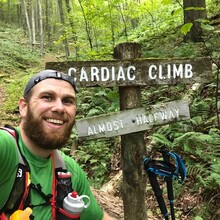 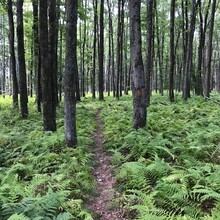 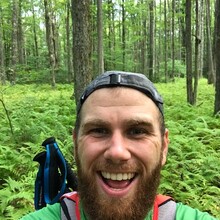 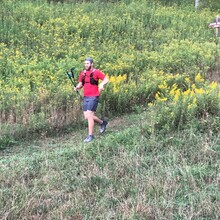 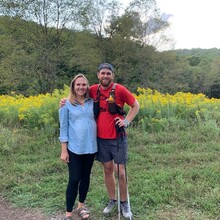 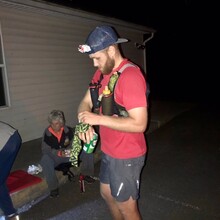 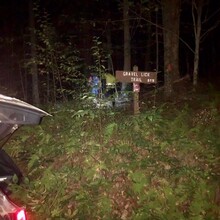 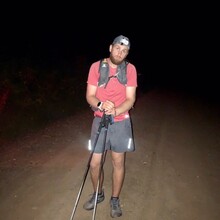 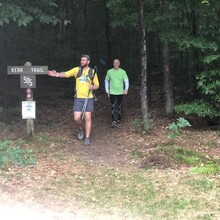 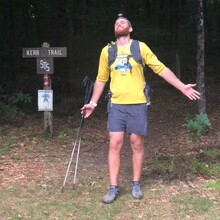 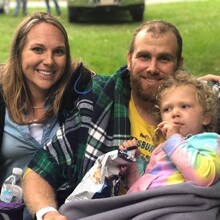 I began and ended at Patterson State Park because it was the closest trail crossing toward the Northern Gateway that you didn’t have to hike into, and also had amenities for the finish. Weather was absolutely perfect for the day with a high of 72 and no rain in sight. Going clockwise left the more technical parts of the trail at the end of my endeavor, however I knew I would be going slower anyway as I would be moving in the dark.

From Patterson I dropped down the first decline by headlamp, and at the bottom of the hill was the first log book with someone sleeping in a tent next to it. The camper wished me good luck, as she had heard of my attempt for the fastest known time. I continued on for the next 1.5 hours in the dark by headlamp and saw a few deer and what I believe was a bear, although it was too dark to be sure.

Just after Thompson road crossing, I was fortunate to see a beautiful sunrise in the few open spots through the forest. I met my crew at Lyman run roughly around 7:45 a.m., and waiting for me was a local photographer who snapped a few pictures before I continued on across the suspension bridge.

After a steady climb and beautiful descent into West Branch Camp, I made it to the infamous “Cardiac Climb,"  which did not disappoint in both beauty and difficulty. I met my crew at the Cherry Springs Fire Tower and changed into dry clothes. With the previous nights rain combined with the morning dew, my clothes and shoes had gotten quite wet. One crew member informed me hog back hollow would likely be muddy (he was very right), so I postponed changing my shoes, and am glad I did. I changed my shoes when I met my crew at Short Run road at approx 11 a.m..

The gradual descent into Ole Bull was one of my favorite parts of the trail, aside from tripping over a root that lead to a minor face plant. It was very runnable and had breathtaking views with the open valley below. I arrived at Ole Bull at 12:45 p.m., and was greeted not only by my crew, but by many friends and family who came out to support me.

From Ole Bull, my cousin, Ian, ran with me for the next 12 miles. This section had some beautiful views and diverse sections of forest, and I was grateful to have the company of Ian for many reasons, but especially for running in front of me to knock down all the spider webs. Partly due to our chatting, and partly due to confusing signage, we missed a turn and continued on the Donut Hole Trail instead of the STS. This error added an extra 2.5 miles and 50 minutes to my end time, as we had to stop frequently to look at the map and get back on the STS. Ending with a steep descent, we finally arrived at 12 mile road at 4:45 p.m.

I was once again solo on my way to Cross Fork, and while I was crossing the pipeline I saw an enormous bull elk and spooked it into the woods. Dusk was setting, and I once again used a headlamp as my guide. I arrived at Cross Fork at approx 8:40 p.m., with food from Deb's Cross Fork Inn waiting for me. This was the only time during my run that I sat down and ate a full meal. My brother in law, Brian, joined me as my pacer through the Hammersley Wild Area. This trail is very technical with many rocks and roots, and traversing steep banks as we went through the valleys was particularly difficult in the dark. I was very grateful to have someone with me during this section, but it was very slow going, and really did a number to my feet.

We met my crew at McConnell road at 12:45 a.m. and my sister, Mandy, ran with me the 4.5 miles to Williams Farm. By this time, running was difficulty due to pain in my feet, and general stiffness in my legs that is typical for this distance and time on my feet. I managed to run the downhill section, then walk/ran the flat part until we reached the farm. From here to Patterson, I primarily ate energy gels for nutrition, and ginger chews to combat nausea, as I couldn't stomach anything else.

My dad, Steve, ran with me the last 13 miles. We were supposed to meet our crew halfway through at mile 7, but missed them, which caused me to run out of food/energy gels for the last 2.5 hours.  Pain in my feet also made it difficult to move faster than a steady walk. Throughout this section, we could hear coyotes and owls, saw multiple deer, and watched the sun rise through the trees.

Congratulations on the FKT Kohl! It was enjoyable to read about your experience, thanks for sharing. I had read your note to the trail club regarding the motivation for this run. I salute you for digging deep those last hours, pushing through the pain. Had to be very satisfying afterwards :)

This is the 2nd year we hiked this trail Labor Day Weekend. We start/finish at the fire tower and go CW. This year it took us a little less than 60 hrs, self supported. Not super fast like you- we take sleeping bags and sleep! Sunday morning We talked to a camper at Patterson who said “some guy started this morning to do the trail in a day!” Guess that was you! It’s a great trail with few hikers. Great pictures!