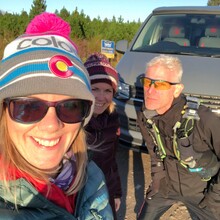 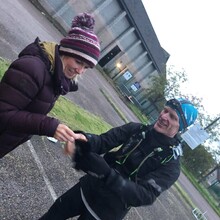 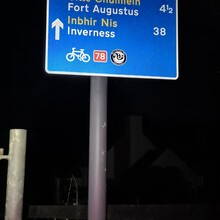 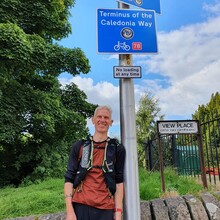 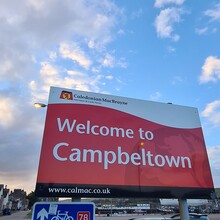 Starting at 00:01 on Friday the 4th September in Cambpeltown, with good conditions, I set off on an adventure that would see me cover approx 230 miles North, to, and finishing in Inverness.

The weather changed approx 15miles in and the rain jacket was worn for sometime thereafter.
To start, running through the evening/early morning was magical as it was a full moon and it helped with spirits. Although the rain continued.
Running well I made, what I thought was the first resupply point at Tarbert, 35 ish miles in. However, the route changed a mile before the town. I knew there was another potential supply point along this half marathon stretch to Kilberry.
It would turn out to be a disaster as the next point was closed.
I had run out of fluid by now and I was 50 miles in and only having had 2 x 500ml bottles.
I passed by a farm building and noticed someone in. They were kind enough to allow me to fill my bottles...phew. Crisis averted but it did drain me a tad.
Onward I ran, North to Lochgilphead, mile 70 and a proper town where I got get decent food and resupply with more fluid.
All of the miles thus far were on tarmac until I reached 5 miles before Lochgilphead. The route diverted, up a hill and onto uncovered paths to divert away from a busy A class road.

My energy levels were a little depleted at this point and I pretty much walked the 5 miles into town.
I sat for a few minutes, ate, refilled my bottles (after having drunk 1ltr already) and then set off running again, North to Loch Awe.
Tarmac changed to canal path for a few miles which was nice. A softer feel on the feet. But, completely flat has it's own issues. I plodded on.
There was a strange request from the route markings to take me up to a derelict/ruined castle (Carnassarie). I say strange as it's on steep, trail tracks which, if you are biking the route, makes no sense at all. Other than a tourist thing.
Sadly, the signage was poor and I had to backtrack to the main road and run along a busy A class road for a couple of miles. The traffic was kind.
The road then changes direction to Loch Awe at mile 85.
I've always wanted to see Loch Awe, now was my chance. I didn't realise that the road around the North edge of it was SO hilly. Up, down, up & down for miles and miles. All on tarmac again. Thankfully it was new tar as this road turns out to be an essential logging road. So, it's kept well.
On I continued up and down the road with up to 18% gradients and LONG inclines I received a call from my crew.
I was super happy to hear from them and established a meeting point for a refuelling stop at Taynuilt.
Sadly, I had to call them back early, at Inverinan (100 miles) as I had run out of fluid again and still had approx 12k to do.
They drove to my location as quickly as they could and when they found me, I was happy to see them, for sure.
A quick chat whilst fuelling and a bite to eat, I set off again to the agreed meeting point further up the road.
I must have been running fairly well after seeing them as I got into Taynuilt approx an hourish later.
I checked my watch and I was 167k in. I had passed 100mile mark in 21hrs 37mins. Not too bad.

After a complete change of clothes, some food and fluids, I set off again. This time heading for Oban, along a quiet road for approx 11 miles.
The decision was made that the turn down toward Oban, just to come back again was pointless. Therefore, I missed that 6k total.
It's clearly for allowing for stops at local shops etc. However, at 01:30 in the day, there would be nothing to see and nothing would be open.
I headed North to Connel.
I had also agreed to meet my crew at Ballachulish some 50k up the road.
This would give them time to rest and relax, sleep if necessary.
Crewing is just as  tiring as racing and I explicitly asked my crew to look after themselves and I would just do what I needed to continue.

Luckily, from Connel to Ballachulish is relatively flat so I was hoping that good progress would be made.
Half way through this section sleep deprivation would rear its ugly head.
I had to have a 5min nap at the side of the road at approx 05:00. Twas a glorious 5mins :-)

More pavement/tarmac but I had become used to that by now and was moving well. As well as I could anyways.

I have to mention that there has been some, simply stunning views along the way. Seeing beaches, looking over to islands and seeing a part of the Scottish countryside I haven't been to before was, uplifting. When the weather was good, times were good also.

I got a message from my crew about where they were parked and I headed on to that point.
Having reached the bridge at Ballachulish I could see them on the other side.
Again, I was happy to see them. The last 50k was a bit tough mentally.
More food and a cuppa was a god send, as was the chat.
Never underestimate what inane chat can do for morale. Twas great.

Pushing on, as I had a ferry, in fact two, to catch. I left and headed for the Coran Ferry.
I was confident on making it but the next one was always the one to watch. The sailing back over to Fort William isn't as frequent and should I miss it, I would either have to come back to the Coran Ferry or do a 20mile diversion around the top of Loch Lihnne. The latter wasn't an option for the time I wanted to achieve.

Making the Coran ferry I ran fairly hard for the next 11 miles and made the next stop for the ferry in 2hrs. However, the ferry wasn't for another 1hr 30mins. Oh well, a sit down but nowhere really to sit comfortably for that time.
I knew that I'd get a proper sleep when I was back on the mainland at Fort William.
The ferry came, we (me and approx 10 cyclists) got it over to Fort William. 1k to the van and a sleep :-)

Again, was great to see the crew. I ate and drank then had an hours kip.
After a good nap, I got ready again, albeit fairly slowly. No matter, I was on the right side of the mainland and it was only just a time to chase now. I could either settle for a finish, or try and chase a good time.
I chose the later. I pushed on, heading to Inverness.

The good thing about some of the route North was I had raced on it in previous years.
Fairly flat and hopefully moving well.

Before leaving Fort William we had agreed that the crew needed more sleep and change the next meeting point.
That would see me run on to Laggan Locks, a 20 mile stretch.
Running on familiar trail I made good time and reached Laggan and tried to be slick with what I needed, allowing the crew to get some proper sleep before meeting me again near Foyers (213 mile mark).

Running away from Laggan I moved toward Fort Augustus and this would see me feel really sleepy. By the mid morning I had to sleep at the side of the road for a few minutes on the way up a rather large hill on the road to Foyers. I was the walking dead at that point. But, with only 1hr 30mins in almost 210 miles, I guess that's allowed.
Pushing on at with the sun coming up for the last morning. I was COLD but a glorious day would open up.
I met my crew before Foyers as I had slowed a little that night due to being so tired,
No matter, more food, a cuppa and I was off again to the finish.

We had agreed that the crew would meet me again at the finish.
It was a welcome sight to see Gayle on her bike. She would bike along with me running for an hour or so before returning to the van for breakfast.
Was good to chat to someone whilst clocking up the miles.
Great thing was, I obviously knew this was the last stretch, and I had food, I was running well again and making good time.

After another hour or so the passed in the van and I ask them to stop so I could grab a coke and two Paracetamol, as my feet were taking a battering.
The two pills really helped after a few miles.
Again I was running strongly and just had the end in focus.

I did get a bit disappointed when the finishing miles seemed to get longer and longer but I arrived into Inverness and followed the markers to the terminus point of the NCN78. One final ascent (how very cruel) and to the post marking the end of the route. I even ran passed it and had to turn around.

I was elated. Great to hear Gayle & Katie cheer me on up the last hill.
And, almost at the same time as I sat down, four guys finished at the post too and gave me a cheer and a clap.
They asked where I'd run from and were astonished to find out I'd done the whole route in 2 and a half days. They had come from Oban on their bike and it took them 4 days!
I'm fairly sure which I would've liked more ;-)
That said, I am super happy to complete the NCN78 and be the first person known to have run it in one go.

I will say this... should anyone want to go out and break it, I'll not return the favour. I've seen enough of tarmac and the hills around Loch Awe.