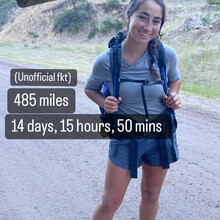 After hiking the Colorado trail, Collegate West route last summer with my friend Holly Proulx from Denver to Durango in 19 days, I decided to take on the challenge of hiking it the opposite direction, seeking to set the record for the fastest time for a woman to complete it. I began hiking at 5:10 am on Friday the first of July and finished at 8:48pm on Friday, July 15th. For my first two resupplies, I had my brother and Dad drop off a box that I had prepackaged with all of my food. My first resupply was at little Molas Lake camp Ground, and the second in the Lake City trailhead parking lot. From there, I resupplied at Princeton Hotsprings, Twin Lakes and and Breckenridge. I collected my water from streams and rivers along the trail. The first six days were very rainy and cold through the most exposed section which made it difficult to get a lot of distance. Additionally, my Battery pack, phone and Garmin were all running low on battery, resulting in me having to shut them off during most of the day for the second half and turning them on periodically for my parents to see where I was at every 6 hours or so. In the end, I didn't finish in the time I was hoping which was 13 days, but I'm still thrilled that I finished at all and was able to unofficially set a record. I hope that this will inspire other girls and young women my age to get out there and do really hard, rad stuff!