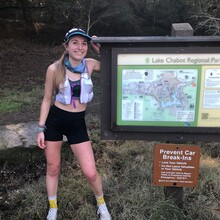 Oofda started out by feeling pretty miserable the first couple miles, thinking about just running home instead of continuing, but I managed to convince myself to keep going at each intersection. Legs were feeling pretty trashed by the last couple miles, but still gaining some speed. Had hoped for a sub 5 finish but just missed it by a little. I followed the East Bay Skyline Trail (north to south) segment on strava exactly, which Chris pointed out in my comments is a little longer and slower (estimated 60-90s slower) than the other strava segment. I don't know what that means for the record but I beat the time by a sizeable amount, even with the longer turns.