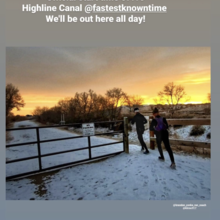 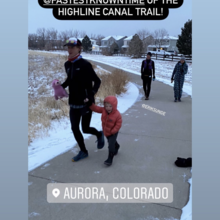 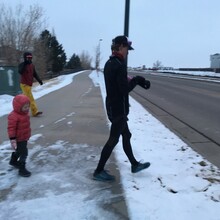 From my social media write-up:

Nobody should ever attempt this on snow. Just don’t. Still, I enjoyed it. Starting temp. 12F with Ryan Smith pacing. Stacy (@marigoldsformimi) met me several times crewing with the kids in the cold! Kaitlyn & Brandon Yonke provided thorough crew support all day and lots of bike and running pacing. Lee Cordova paced a crucial ~13M stretch, with Jimmy McLoughlin joining some for super helpful navigation assistance. Jimmy is going for the FKT next weekend, and I’m rooting hard for him to crush it! Zach Vine met me with a Pop Tart that I enjoyed over about half a mile, despite my face being too frozen/numb to be able to chew much. Erik Sunde paced me the final ~15M, which turned into a fair bit more than that, as the course was very difficult to follow, and we ended wandering around in circles a few times. Amy Sunde crewed and gave me a life-saving blanket at the finish line. What a team and what a day.

I aimed to run sub-9:00, and if I had always stayed on course, that may have happened. Without the snow on the ground, I’m fairly confident it would have happened. I only beat Jeremy Bradford’s 2014 UNSUPPORTED FKT by less than 8 minutes. His time is far more stout than mine, and since my run was supported, his FKT still stands. Jeremy is a far more skilled and experienced navigation expert and endurance adventurer than I am, and I’m glad I had his gpx file on my watch to follow all day, despite that I still got lost a bunch.

I’m guessing my achilles will be damaged from having my foot slip a bit almost every step, like it was after a comically muddy Brazos Bend 100. TBD.

This route is accessible, adventurous, flat, dumb, often ugly, and all-around weird. Consider it for your next dumb adventure. Did I mention that this route is dumb?