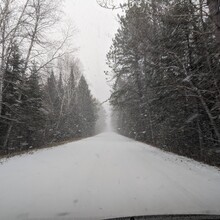 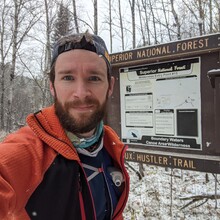 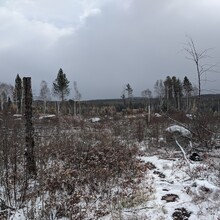 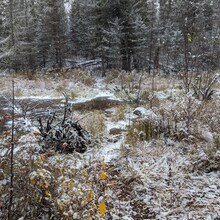 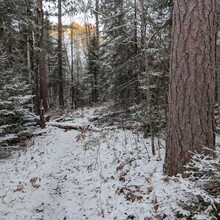 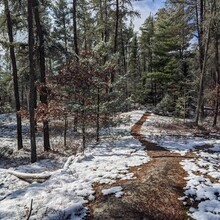 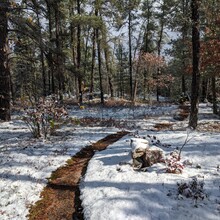 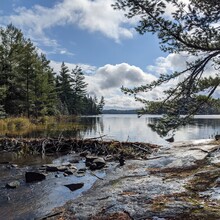 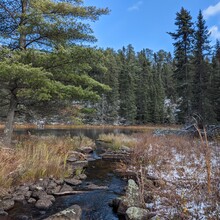 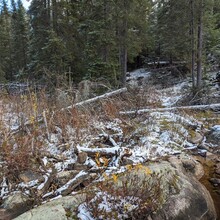 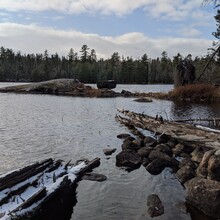 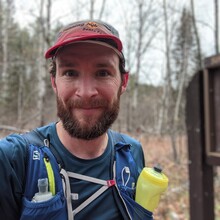 I ran the Sioux-Hustler Trail on Friday, October 16th unsupported in 6 hours and 29 minutes. I began at the trail permit station/kiosk at 11:01am and returned at 5:30pm. Trail conditions were slower than I had hoped due to beautiful, fresh snow on top of autumn leaves. The snow made it difficult to discern between dry and wet patches of trail and made footing precarious with slippery rocks, roots, and leaves a constant. I ran with poles which were of great help on the frequent short climbs, descents, and stream crossings. My shoes and socks were fairly wet by mile 4 and by mile 20 I gave up trying to jump around or over mud holes.

I had run the Sioux-Hustler six years ago counterclockwise with Rob Henderson and opted to run the trail counterclockwise again due to its relative familiarity. I was pleased with my choice to run counterclockwise as I found the last portion of the loop to be less technical and easier to follow than the first portion. The USFS has done a good job of keeping the trail cleared of most deadfall, but there are still a fair number of downed trees to climb over or shuffle around.

I carried food, water, and supplies in a running vest and stopped for water three times along the route, first at Lynx Lake, then at Hustler Lake, and finally from a deep puddle in the middle of the trail somewhere east of the Loon River. I flushed four grouse encountered a really friendly solo backpacker twice, and passed a large group of dayhikers near the parking lot on my way in, and two more backpackers on my way out. I was shocked at how busy it was considering the forecasted weather and location. Most mysteriously, I followed the tracks of two other runners from about mile 12 all the way to the finish. The tracks looked fresh in the snow, but I must have always been just a few miles behind them as confirmed by the solo backpacker I stopped to speak with south of Pageant Lake.

For those wondering how to pack on future attempts during the spring or autumn, I ran with and used:

Navigation - Avenza Maps app on Google Pixel 2 with USGS 7.5' geoPDF quadrangles for Shell Lake and Takucmich Lake draped with a KMZ file of the route.

I ran with and did not use:

Conclusions: Overall, I am satisfied with the run considering the unexpected conditions. An early October attempt without snow would make me feel better about running without extra layers and emergency gear. In the future, someone traveling lighter and in dry, snow-free conditions would have a good shot at a sub-6 hour time, if they are familiar with the trail.

Hey Lane, nice job man!  Clint and I were the two runners ahead of you on Friday.  We made a couple of wrong turns but were able to finish at 7 hours 13 minutes which bested the FKT at that time by 7 minutes.  We were also the two backpackers you saw as you were just finishing.  We planned to run the trial in the morning and then headed back out to backpack the loop a second time over two days.  Conditions were slippery with the snow so even if we hadn't made those wrong turns we wouldn't have been able to beat your time of 6:29.  Congrats!

Hey Ajay! Thanks for the message and for solving my mystery. I was encouraged to see signs of other runners on the trail last Friday. Your tracks looked fresh enough I was always convinced that you were right around the next bend in the trail, but you guys must've been miles ahead the entire time. I wish you would have flagged me down!

Thanks for posting video of your adventure. It's fun to see the trail conditions you documented and have others confirming that conditions were less than great. Hope you had a good backpack outing on your second loop. I'd like to go back soon, but it probably won't be until spring.