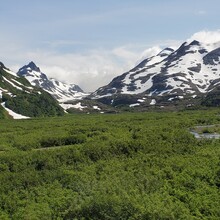 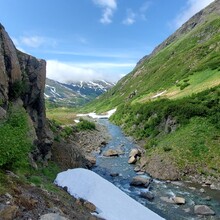 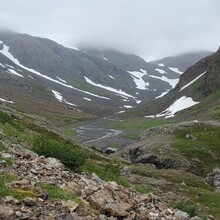 Over the past 5 years Hig, Erin, and a host of volunteers have built this rugged backcountry 50k trail through a remote section of south central Alaska. The trail was run from east to west as part of the inaugural Tutka Backdoor 50k (actually just over 34 miles). Access to the beginning of the trail in Taylor Bay was via float plane from Homer, AK. The finish is at a campground on the south side of Jakolof Bay which is 2.5 miles on a gravel road at the end of the trail.

The trail involves many creek crossings, the longest of which is Taylor River. This is the first crossing and was very manageable because of the favorable weather the few days leading up to the event. Route finding is probably the most challenging aspect of the course if you are focusing on speed rather than the landscape. I found myself off course a number of times while in the alpine tundra when the trail was not worn in and you had to follow cairns. Slowing down a little to make sure I was on track would have been useful in these instances. Besides a few missed corners, navigation went smoothly.

I hit my knee hard on a stump that was hiding under a large devil's club leaf with roughly 8 miles to go and it is still swollen 4 days later. This was a silly mistake that I could have avoided if I was more worried about devil's club, but at that point in the day I didn't care about another little scratch.

One last thing to note about this route is that if you get to Tutka Lagoon (different location than Tutka Bay) while the tide is higher than 13' you will be forced to do a bit of bushwacking. If you can time your start to put you there when it is lower this will make your final few miles a bit more enjoyable!

Thanks to Erin, Hig, Michael, Ben, and all of the racers for making this such an awesome experience! I will definitely be back to spend more time in this area.