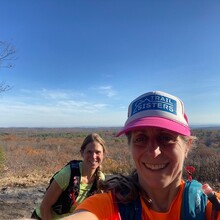 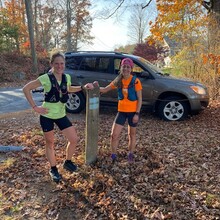 Debbie and I started at the Northern point and headed south.  On the drive to the start, we had stopped and planted water on route 44.  The trail was covered with downed trees and branches.   Crawling over and under giant tree trunks became routine in the northern half! The leaves were thick and felt like we were running on snow! But just made for more of an exciting adventure out there.  There were several areas that were a bit confusing, but we were always able to find the blue blaze.  The only area that was tricky was by the residential area where there is a re-route.  The day started cool but warmed up as the day went on. It was a beautiful fall day to spend in the woods!! We ended at the end by Marsh Pond.  Awesome run!!