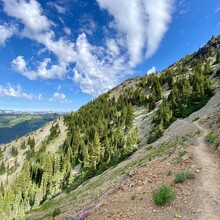 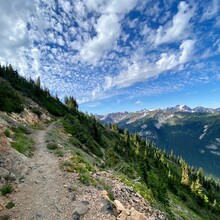 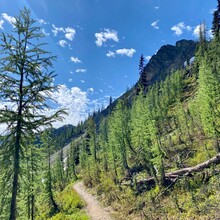 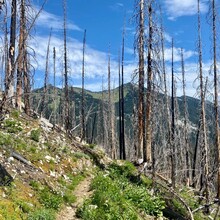 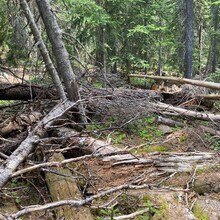 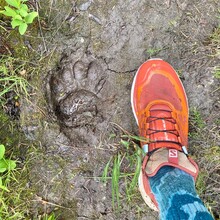 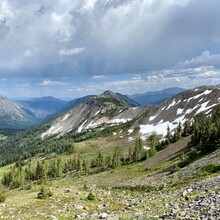 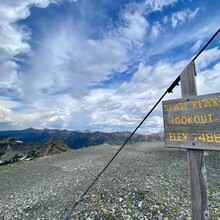 Originally tried to attempt this back in October 2021, but arrived at the trailhead to 25 degree temps and a white out (while it was sunny down in Mazama) and decided it was more miles than I wanted to do in those conditions and wow, in hindsight I am so glad I waited to do this on a nicer day! The first half of this loop is stunning - some of my favorite PCT miles ever, easy rolling terrain, and amazing views. I could have done this portion much faster but was too busy taking a million pictures.

Once you start descending on the PCT towards Holman Creek the fun (and blowdowns) begins! I had previously heard that the Holman Creek trail was a mess and hard to follow, and on my way there a met two backpackers who had turned around because it was too rough. At first it didn't seem too bad - lots of downed trees, but most weren't too hard to get over (I didn't keep count, but I'd guess I climbed over/under 100 trees by the time the day was over). I hoped this was the worst part, but after turning onto W Fork Pasayten, things really got fun. A couple miles in I met a girl and her dog (the last person I would see for the rest of the day) who had turned around because they lost the trail just before Shaw Creek. At this point I was ~17 miles in and not about to backtrack unless I absolutely had to. I continued on and crossed Shaw creek and found the trail again on the other side pretty easily and thought I was set. However, it might have just been a game trail because in less than half a mile it completely disappeared. I picked my way through trees & bushes for another mile or two, basically parallel to the "trail" the whole time but never actually finding it. Eventually I just accepted that I might be bushwhacking for 8 miles, when suddenly the trail reappeared again! Not sure if I missed the real trail somewhere or if all the blowdowns and overgrowth had just hidden it, but from here on out it was relatively smooth sailing again, with a few more blowdowns and creek crossings sprinkled in. An afternoon thunderstorm rolled in, providing some rain & wet overgrown bushes for the last 3k of climbing to get back up to Slate Pass. Just below Slate Pass there was some lingering snow on the traverse, which was very firm with a bad run out, it was hard to kick steps and really slowed things down but it was short enough. Finally made it to the top of Slate Peak and it was an easy run back down to rejoin the PCT.