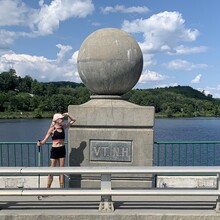 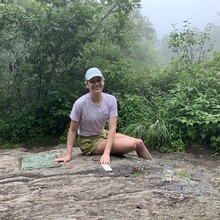 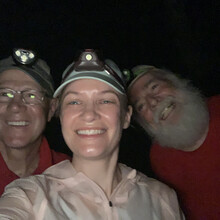 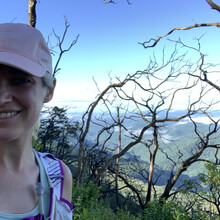 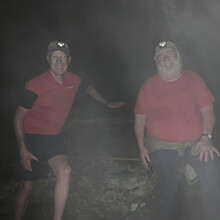 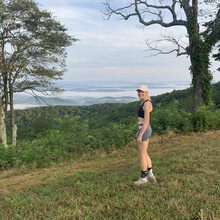 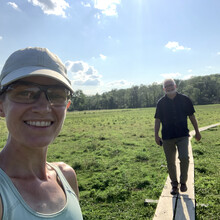 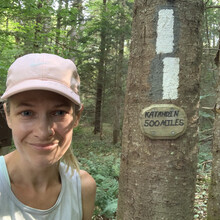 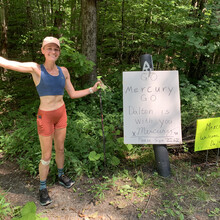 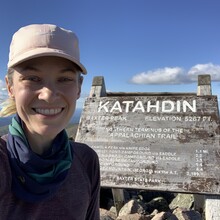 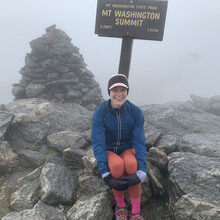 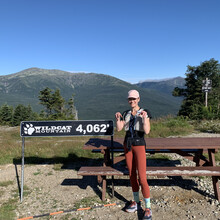 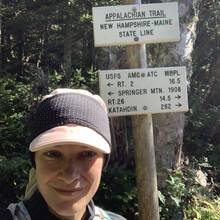 On August 27th, 2020 at 4:30PM, I completed the Appalachian Trail on Katahdin exactly 51 days, 16 hours, and 30 minutes after beginning on Springer Mountain on July 7th, 2020 at 12:00AM. I was crewed the entire way by Warren Doyle (Jupiter), who drove the support vehicle (Pegasus). I also received support along the way from family, friends, and kind strangers in the form of moral support, grocery resupplies, and the occasional hikers/runners joining me for sections on the trail.

My initial goal was to attempt to break the overall FKT or women's supported FKT held by Karel Sabbe and Jennifer Pharr Davis respectively. Warren's and my plan/strategy was to put in some big days early on with the hope of continuing on with more "normal" days through the rest of the trek, knowing I wouldn't be able to match Karel in the tougher sections up north, particularly in New Hampshire and Maine, and knowing Jennifer had put in a solid continuous stretch of big days down south. I put in the longest first day ever in an AT FKT attempt at 69 miles, and reached Fontana Dam by the end of the third day, also a first by any record attempter. However, halfway into that third day, I developed shin splints and was reduced from a combination of running and walking to mostly walking. This would continue through the rest of the journey.

Through day 18, I continued to mostly walk long hours and achieve the daily mileage goals we deemed necessary to break the Jennifer's record (at that point I was averaging just shy of 50 miles per day). I kept going in this manner with the hope that I could work through it and eventually start running again. With the slowed pace and increased hours on the trail (approximately 18-20 hours per day), I was getting very little sleep (3-3.5 hours per night) and my legs were not recovering. I stopped early on day 19 at 39.2 miles at Hawksbill Gap in Shenandoah National Park, with the hope that a "normal" amount of sleep would help me feel more recovered and able to continue pursuing the women's record. The next morning I felt no different, so day 20 and 21 were spent mostly recovering and walking very few miles (12.8 and 26.3 miles, respectively).

That was a big turning point in which I had to decide whether to try to continue on, and if so, what manner I'd do that in. The thought of not reaching Katahdin at all was devastating, so I was determined to keep going as long as my legs would allow me to keep moving forward. I considered giving up on the FKT attempt, continuing on with much lower mileage per day, and taking the pressure off. Warren could only help me through a certain date and I had the gear I needed to hike on my own, so finishing as a more traditional thru-hike was a consideration. Looking at how much we accomplished to that point, however, I didn't feel ready to let go, and we decided to at least try and start day 22 and see how I felt before making any big decision. Knowing it would take a miracle to get back on track for the women's record, we set some new goals: A) Finish in under 50 days, B) Finish in under 52 days to beat David Horton's time, and/or C), Finish in under 54 days to beat Heather Anderson's time (her FKT was self-supported) to become the second fastest woman to complete the trail. We also saw that Fastest Known Time acknowledges both northbound and southbound FKTs, and Jennifer's women's record was southbound- that gave me motivation to put a woman's name on the map for a northbound FKT.

Warren created a revised schedule and day 22 began with a new purpose. I felt recovered enough to put in just over 49 miles that day- a huge rebound after hitting rock bottom. I continued to mostly walk with a little bit of running/shuffling here and there, and stayed on track for finishing in under 50 days all the way through the beginning of New Hampshire. While I was able to run with little pain at that point, my confidence running on the rock- and root-filled terrain in Vermont was very low, so the pace continued to be slow going. Then, my first day through the White Mountains was a huge wake-up call. My pace slowed considerably more through the more technical and challenging terrain. With fewer road crossings and our wanting to avoid night hiking over the exposed sections above treeline, we revised my schedule to the new "B" goal of under 52 days. This meant a few shorter days and extra recovery through the tougher/exposed sections; once I was out of the Presidential Range though, we resumed longer days of 18-20 hours walking. My feet were in excruciating pain from the impact of hiking over mostly rocks for several days straight, and one of my big toes began to swell up to about the size of a golf ball. I put in my longest day of 21 hours and 50 minutes in the 100 Mile Wilderness on my birthday, August 25th. It was psychologically the most difficult day on the trail, but in a way I considered competing it a "birthday gift" to myself, because it meant my final two days (August 26th, 27th) would be relatively smooth sailing with fewer miles and less difficult terrain. I was lucky to have a beautiful day to climb Katahdin. There was a strong, cool breeze, but the mountain was warm in the sun. Most hikers were descending as I was ascending. From the tabletop section to the final ascent, I only saw one hiker. I climbed to the summit alone and had it all to myself. It was a very surreal and special moment that I'll never forget.

Some post-hike thoughts I shared on social media:

8/31/20 From Springer Mountain in Georgia to Katahdin in Maine, my nearly 52 days spent on the Appalachian Trail were like a hyperlapse of rising and falling suns, moons, stars, storms, calm, mountains, valleys... it wasn’t so much a daily endeavor, but more like a singular continuous stretch, moving ever forward. I felt so confident and prepared going into it, but I don’t think anything could have prepared me for what I was about to endure, other than doing “the thing” itself. I thought I knew, but I had no idea. I learned and grew in a way I never have. The trail taught me so much about myself and the good of other people. It taught me that while it’s impossible to control your circumstances, you can choose how you respond. Every early morning I would think, “I don’t know how I can possibly do this”, and every late evening I would think, “I can’t believe I just did that.” The trail brought out my strengths, my flaws, my little experience and vast inexperience. I don’t know if I truly ever let myself believe I would make it to Katahdin until I was literally climbing the final ascent. I think the only way I could wrap my head around what I was doing was staying in the moment and putting one foot in front of the other. I didn’t know what the future would bring, but I could keep walking. As a supported endeavor, this was truly a team effort with Warren, aka Jupiter. He was completely committed to the task and did everything to “help and not hinder.” I feel so thankful to have had him in my corner. The saying, “It takes a village...” is also very fitting as I had so much help from friends, family, and kind strangers all along the way. I was so happy to be able to share this journey with those it seemed to mean a great deal to- both in person and through Jupiter’s faithful updates. The AT is a very special place and it’s no surprise that so many people are completely captivated by the trail. I think it will take a while to unpack all I experienced. Most quiet moments throughout the day, my mind drifts to the trail. In my dreams every night, I am still hiking. My aching feet and healing toe are a reminder that it hasn’t been so long. I’m a changed person, and so grateful.

-On Day 20 I forgot to stop my watch at the end, and the GPX file includes some "driving" miles in the support vehicle after I finished hiking. You'll see on Day 21 I began hiking from where I left off the night before.

-I'm missing GPS files from my watch from day 11 through most of day 15. We think my charging cable got left behind at a trailhead. I had to order a new charging cable and have my parents bring it to me. The GPS file from my Garmin Inreach Tracker should fill in the gaps.

-My watch ran out of battery toward the end of the day on several occasions, but my Garmin Inreach tracker should fill in any gaps, and vice versa.

-A link to a PDF of my start location, start time, end location, and end time for each day, recorded meticulously by my support crew, is included above.

-My GPX files surpassed the maximum upload limit, so I included a link to a google drive folder where they can all be downloaded from. Included are the daily files from my Garmin Forerunner 245, and a file of the entire trip from my Garmin Inreach Mini.

-I hiked through the tropical storm Isaias starting from Delaware Water Gap, NJ. The trail through the rest of New Jersey, New York, and Connecticut had numerous blowdowns, fresh from the storm. I'm willing to say there were at least one hundred. There were times I was able to climb over/under the trees, but many times I had to go around then find my way back to the trail. At times there were rows of large trees down, obliterating the trail. In those instances, I minimized the 'off trail' time as much as possible and returned to the trail as close to the blowdown(s) as possible.