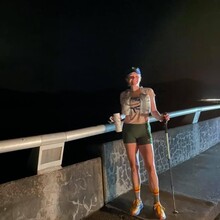 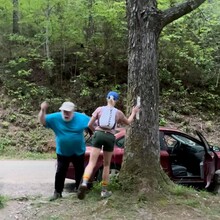 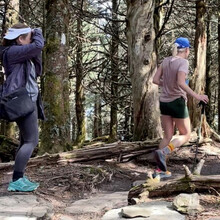 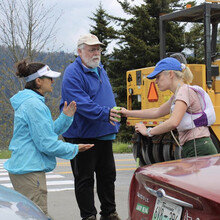 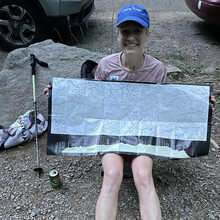 On Monday, May 17th at 2:00am I set out from the north end of Fontana Dam to attempt a women's supported SCAR FKT. At 8:27pm I reached Davenport Gap, achieving my goal!

I was supported by Warren Doyle, Adrienne Mitford, and Jen Henry. We got a couple hours of sleep in our tents and cars under the stars with a backdrop of mountain silhouettes before setting off. They met me at the Clingman's Dome parking side trail (33 miles), Clingman's Dome access road side trail (36.3 miles), and Newfound Gap (40.4 miles) with food/water resupply and tons of moral support.

I ran the entire way solo without pacers. At some point in the dark, wee hours of the morning I startled a sleeping boar and it grunted and snorted me a few times which gave me a nice heart rate spike and adrenaline rush.

I was treated to a magnificent, deep red sunrise from Rocky Top, which I had all to myself!

The weather was just about perfect. High of 60, partly sunny, and cool. Humidity was 75% and I sweated buckets from start to finish.

Passing through Newfound Gap I was met with cheering not only from my crew but from an entire construction crew in the parking lot that caught wind of what we were doing. One worker exclaimed, "72 miles? I would die!"

The best part of the day was just before emerging from the woods at Davenport Gap and hearing Warren, Adrienne, and Jen whooping and cheering me in. It was a suspenseful finish as my GPS tracker had died (so they weren't totally sure of my progress and were on pins and needles), plus I knew I was cutting it close and really had to hustle in the last few downhill miles with a laser focus on not tripping over all the rocks and roots in the process.

This was nice personal redemption after getting turned around in the Smokies in my AT record attempt last summer. Plus I've always wanted to see GSMNP in the spring!

To clarify exactly where I started and stopped my watch, so there's no ambiguity, and for future reference:

Start - North end of the Fontana Dam bridge, right across the street from NC-1245. The photo of me in the dark on the bridge is exactly where I started (note the uneven barrier height for a reference point), plus there's the Strava link in my report for a map view.

Finish - I touched the double-white blazes on the tree by the road at Davenport Gap, then stopped my watch (also pictured above).