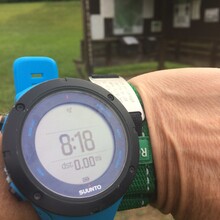 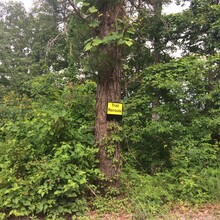 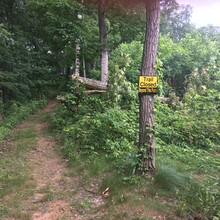 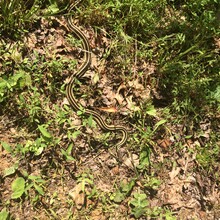 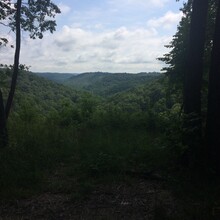 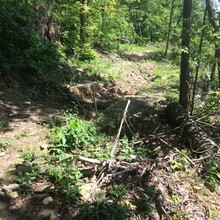 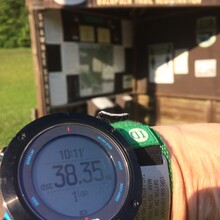 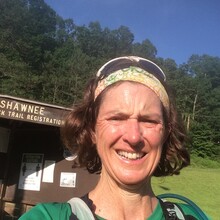 Forecast was to be low 80's with a chance of thunderstorms, actual weather was mid-high 80's, with very few clouds.  Humidity was high and the sun relentless despite the canopy of trees.  Morning started out foggy, but by 9:30 the sun broke through and the heat was on.

I started about 20 minutes later than I wanted due to a detour on my drive that ultimately got me lost for a bit.  As I headed into the north loop, it looked like someone had mowed the grasses recently, so I was happy to see that I wouldn't be spending the entire day in high grasses for fear of ticks.  When I got to approximately mile 2.7, the trail was closed and had a re-route up the forest road (on map, this is the first forest road crossing).  Looking at previous run on this trail, it looks like the forest road was about the same distance, but obviously not as much fun as the single track.  I found the first water spigot easily, but only splashed my face with the water.  By now, I was dripping with sweat.  At the second campground, I refilled my handheld as well as my bladder, since I knew I was not going to refill at camp 3 (Camp OYO).  I was eating regularly and feeling good.

Crossing OH-125 and starting the south loop was more of the same.  The first bit of this section seems to be a different biosphere that the north loop, with more humidity and ferns, as well as creek crossings.  I took advantage of the creeks to put cool water over my head as often as I could.  I hit mile 19 around 4.5 hours and was moving well and feeling good.  This section had not been mowed, so the grasses were higher in places which kept my concern for ticks a bit higher, luckily I never found any.  There was also some trail damage as well as more downed trees to scramble over.

I had heard that the water spigot at camp 4 was hard to find, so I had programmed my watch with an approximate location as a waypoint.  Unfortunately, I was never able to find it.  I wasted time looking for it and in hindsight, should have just filtered water from the creek immediately.  However, since I thought I had enough to make it to camp 5 (about 4 miles later), I pressed.  About 2 miles later I ran out of electrolytes in my handheld and needed to stop to filter water to replenish.   Which was a good thing, since by time I got to camp 5, my 2 liter bladder was almost empty.   In my desire to keep moving, I made another critical mistake and stuffed the bladder back into my pack, which meant all the gear slid to the bottom and irritated my back.  I had to stop a shortly after to fix that.  By now I could tell I was slowing down and was frustrated that I had started loosing time.

Around mile 30, the heat really hit me and I started to get nauseous and unable to eat.  I kept running, but my pace was slowed.  I fell at one point, opening up a wound on my hand from a fall the week prior.  Since it was bleeding pretty badly, I stopped and pulled out the first aid kit and put a bandage on it.

I kept waiting for the smooth single track that I love as it brings you down to the lake and finally hit it.  While I didn't make my goal of sub-10 hours, I did what I could in the heat.  I will try this again for a faster time once the weather cools down.