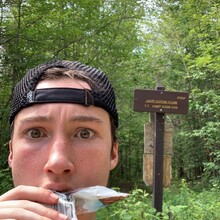 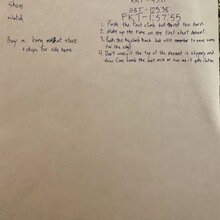 That was kinda tough. Didn’t have super high expectations going into it because my legs were pretty tired and I’ve been feeling sick the last day or two so I was coughing a little this morning. As it turned out, basically everything went according to plan and somehow I got it.

In the first 600’ climb and descent I pushed it a bit and made a minute or so gap which was the plan because I knew I’d lose time on the steep climb to the notch. As expected I lost it all on the steep climb but still hit the red rock trail 3 seconds ahead of the split I had. I struggled on the climbs along the ridge and lost at least a minute. I hit great brook trail 2 minutes behind the split I had of 1:25:38. I didn’t think I could make up that much time on the descent but I bombed the steep upper part and then when I hit the fire road I just tried to hang on for the next couple miles. I wish I had a little more speed to close out on the fire road. Felt really slow during the last couple miles but I can’t complain that much.

Overall I think there were tons of places for improvement. Someone fast could probably run this at least 15 minutes faster, maybe more. I love how rugged the trail is. I’m hoping somebody faster will come and push this route further. Thanks Xander Keiter for the splits I grabbed from your strava, they were really helpful!