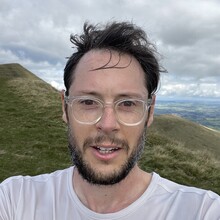 Having moved back to the UK from California a few months ago, I'd been keen to start enjoying the beautiful outdoor adventures that the UK has to offer. A trip to Brecon Beacons got me excited about this loop and after hiking it the day before I decided to take a shot at the FKT. I recorded on my watch and on the Strava phone app just to be sure of no gps glitches with the tracking. It was a warm day down in the valley but things cooled off up on the peaks. I took half a soft flask and one gel.

I passed two groups of youngsters on the climb up to the trig at Twyn Mwyalchod and they seemed a bit unsure why I was running up the tough first climb. I found it hard to keep a decent pace on the steps of that climb so there's time to be gained there. Said hi to a hiker who sat at the trig, enjoying a sandwich and the view. Then I made my way along the ridge, which is rocky enough at times to need to concentrate and I didn't quite get into a groove. I think a runner with more technical ability could take some more time off on this section. I had several hikers cheering me on and giving friendly comments as I passed, some that I'd seen in the parking lot at the start earlier.

I pushed a bit up Pen y fan and joined a lady and her dog for a little photo op on the top, which had us both chuckling. I found the descent down from Pen y fan a little tough and didn't want to trip, so I took my time. I think a more confident downhill runner could save 1-2mins on that section. I made a point to say hi to all the hikers going up in the other direction.

The final climb up to Cribyn was fun and I passed a few hikers on their way down which helped to lift the spirits. There's a false flat that fooled me into thinking I had less time till the summit than I actually had. Once I was there I had a brief chat with a hiker who couldn't believe I'd run around the loop (maybe he'll try it now he's seen it happen?). I hit the summit at 61 mins on my watch and from there I headed down to the long straight back to the start. Again, I think a top runner could shave a fair bit of time off here. I found it hard to keep my form and speed while having to watch my foot placement with all the rocks. Someone with more technical skills and speed would take a few mins off here.

Overall, it's a really fun loop and one that more people should enjoy. I think the updated route and GPX will lead to some fast times, certainly a sub 80mins, hopefully a sub 70, and I am pretty curious to see if there could be a sub 60 too. That would be amazing to see!