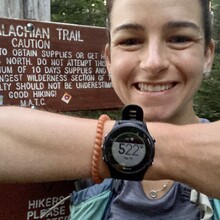 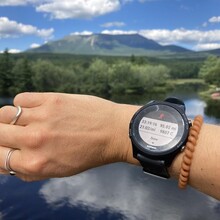 I had a week of vacation in August and originally hoped to do a multi-day fast-packing trip. After not getting organized in time to make that happen and realizing I could benefit from some down days, I changed plans. Never had I ever run 100 miles, so I figured I'd give it a shot.

My planning was minimal having mentally committed to the run at the start of my week off. I spent too much time at Trader Joe's looking at various salty and sugary snacks, imagining how appetizing they would be after many hours of running, and maybe not enough time researching the route. I identified the two bail spots. Based on other people's trip reports, I decided south to north was preferable. I'd do the bulk of the elevation in the first half and hopefully mindlessly run the flatter half once I was tired. I downloaded the Guthook app and went on a blueberry picking hike a few days before to figure out how to use my SPOT. That was that.

On Thursday, August 13th a little after 5:20AM, I started running from Monson to Baxter State Park along the Appalachian Trail on the section called the Hundred-Mile Wilderness. Despite Garmin not agreeing the trail is 100 miles, I'm going to count it as such. The first day was forecasted to be warm - in the 80s - but the lovely Maine woods provided shade, so I never got too overheated. The moss was beautiful, the lakes were plentiful. I focused on keeping my pace comfortable and finding the least beaver-contaminated water sources. The miles started passing slowly around 30 and I slogged through my first extended bonk. Right around mile 40, I summited White Cap and was greeted by early sunset views. There was cell service, so I got encouragement from family, ate fistfuls of pickle flavored potato chips (new favorite trail snack), and popped in music. Combined, this was bonk-reversing and I enjoyed many miles of fun, flowy downhill. At mile 50 I treated myself to a 30-minute nap on a beach on Crawford Pond. I crossed my second potential bail point, Jo-Mary Road, feeling decent. However around mile 64 I decided I needed another nap since I was slowing down. Around 3AM, after 20 minutes of napping, I started running again. The sleep bought me a great hour, but then I began mentally and physically slowing again. The latter half of the trail was indeed flatter, but rootier too. The sunrise was encouraging and the terrain near Nahmakanta Lake is stunning. However the steep ups and downs over the small ridges by the lake felt like the mountains at the beginning of the route, and took their tool. I indulged in a third power nap around mile 77 - hoping 10 minutes would be as rejuvenating. It got me a comfortable mile or two, and then I rode out another bonk until nearly the finish. After a hot climb over Rainbow Ledges, I threw myself a pity party while sitting in a stream filtering water and eating cinnamon toast crunch churro cereal (shown to reverse bonks after getting me out of the Grand Canyon at the end of my rim-to-rim-to-rim run this winter). If I was going to call this thing a run, I decided I should probably be running at the finish, so I picked it up with a mile and a half to go. I'm not sure if the 'official' finish is the Golden Road or Abol Bridge, so I just ran down the road to the bridge.