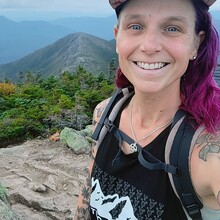 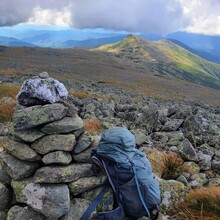 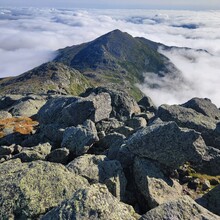 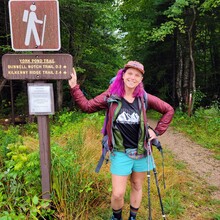 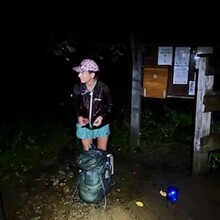 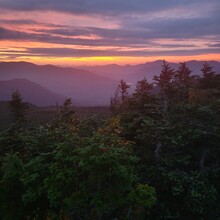 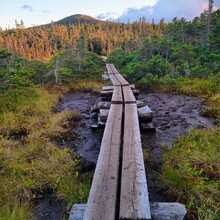 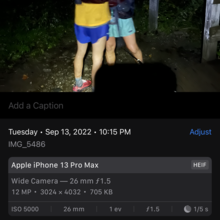 Rained until mid morning got started after 1030. Section from after Cabot to waumbek overgrown in spots, handful of blow downs. Starr king was pretty good. Road walk gave me first views walking by farms, walked into dark, forest service road was slight incline until it got steeper in last couple miles to caps parking lot where I camped around 11

Please note there is a brief gap in the GPS track on Caps Ridge. I had the tracker on, but apparently it didn't track for some reason. Steep climb up caps ridge, mostly rock scrambling to top of Jefferson. Steep rocks descent and ascent to Adams. Down to Madison Hut where I got water and dried my tent. Steep scrambling to Madison, descent down pine link was wooded Steep and wet. Butt sliding and tossing poles down. Road walk while eating lunch.

Straight walk up Ravine to get to Moriah out and back then ridgewalk into the night, descend to Carter notch and cowboy camp on the porch. Woke up at 1, climbed up to Wildcat, then over to wildcat D and cowboy camped on the skilift until 6. Please note there is a brief gap in the GPS track from Carter Notch to Wildcat. I had the tracker on, but apparently it didn't track for some reason.

Down Wildcat ridge at 6, headed up Glen Boulder. Steep ascent above treeline. Out and back of Isolation was muddy, bummer giving up all the elevation I had just fought for up Glen Boulder. Climbed back up and the trail was rocky but easy to go relatively quickly since the rocks were dry. Eventually put down pack to out and back Washington where I went to the bathroom and got water at the visitors center.

Skipped LOTC since I had a friend working there and headed along the prezi traverse to Mizpah Hut, got water and finished out Pierce and Jackson, down the steep wet descent toward Crawford Notch, stealth camped around 9 or 930 maybe a mile from Crawford notch.

Passed Crawford Notch in dark, got light on Tom, Field and Willey then long connector to Zealand Hut, got water put down pack and started 2.5 mile climb to Hale. Back down to hut, rest snack and begin long flattish section on AT and Shoal Pond. Shoal Pond overgrown and flooded, slow going. Desolation Trail up carrigain was brutal, made it in time for sunset, water from fire warden's well then hike down to flat trail where I camped until 530 next morning.

Got lost in dark on overgrown old forest road, had to bushwhack to get to Carrigain Brook Trail it was awful. Got light and made easy miles past Sawyer Pond crossed river and walked on Kanc Hwy.

Up Passaconaway and over to Whiteface and then to the Sleepers in between there and the Tripyramids. Overgrowth in parts around the Sleepers. Plenty of scrambling around Tripyramids, down Scaur Ridge to a long Forest Road walk, much needed to rehydrate, eat food and make a call.

Up Tecumseh at dusk on nice trail with some steps built in. Down in dark to camp in Tripoli Rd parking lot.

Please note there is a brief gap in the GPS track on Tripoli Rd to the top of Mt Osceola. I had the tracker on, but apparently it didn't track for some reason. Headed out around 545, quick road walk to Osceola trailhead, pretty straightforward ascent up Osceola, over to East Osceola, coming down from there was very steep and rocky. Saw big bloodstain on one big rock drop-off.

After short roadwalk on Kanc, headed up Hancocks. Approach trail was in great shape, easy hiking. Took the Summit Loop out and back going north to Hancock and then over to South Hancock to do the steeper side as an uphill for safety.

Cedar Brook Trail from Hancocks over towards Bonds first 2-3 miles or so was soggy and slippery/mossy.

Bushwhack to Pemi River and rock hop across to get to Bondcliff trail. It's long but relatively well graded incline most of the way. Crazy views along Bondcliff io to Bond. Hiked out to West Bond as it got dark then hiked to Zealand in the dark along the AT and camped at wooded summit.

Hike back from Zealand in the dark, forget to put on my tracker and have to go back and start over at Zealand summit. Cut over to South Twin, out and back to north twin. Some mucky spots between north and south Twin. Back from North Twin and down Steep slippery rocks to galehead hut, get water, run up Galehead out and back, back to hut to get water and go to bathroom and head down lovely smooth trail to 13 falls campsite for Owls Head out and back. Lincoln Brook Trail was wet and slippery and slow going. Owls Head Slide was tough, but got to the summit, considered bushwhacking down but ran into a wall of young spruce trees so decided to go back down the Owls Head Slide.

After getting back to my pack at Thirteen Falls, I ascended to Garfield where I got some service, checked the weather and realized my window to safely do Franconia Ridge was closing with an incoming storm so I pushed up Lafayette and hike the ridge in the dark to get to the Liberty Springs intersection and camped nearby.

Got up and out and back hiked Liberty and Flume in the dark, saw sunrise on Liberty when I came back. Grabbed my pack and headed down the AT, under 93 and up to Lonesome Lake in the rain. Dropped my pack at the hut, took Hi-Cannon the the top of Cannon then back to the hut. Grabbed my pack and took Fishin’ Jimmy to Kinsman Ridge Trail all afternoon, grabbing North and South Kinsman. Intermittent rain slowed me down as I nursed a sore ankle. Made it to Beaver Brook by dusk and began the ascent of Moosilauke as the rain started and it got dark. Rain, wind and lightning intensified with high winds and driving rain at the summit, which made it hard to find the Cascade Gorge Trail because of the lack of visibility. Once I did, the descent was walking through flooded trail and slippery rocks until I got to my ending point, the Moosilauke Ravine Lodge.