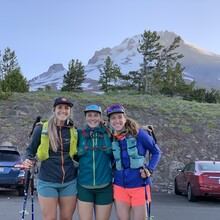 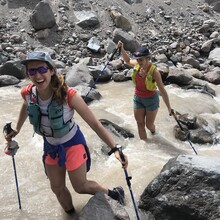 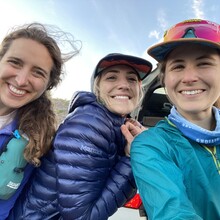 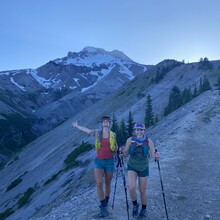 Together as team, Kayla, Megan, and I completed the women's unsupported FKT around Timberline Trail, OR. We got an earlier start than planned around 6:15 am and were incredibly stoked and pumped as we geared up to set out. We had been checking snow conditions leading up to this for about three weeks, in hopes it would be mostly slushy and melted. We started off strong going clockwise and went through the trees first, hoping the exposure on the east side of Hood with the lovely views would fill us up at the end.

The snow and river crossings were much more involved than estimated (i.e. completely post-holed some sections and forged the river getting water-logged). The amount of downed trees was also exceptional and felt like a steeplechase! The first 20 miles we felt very optimistic, after meeting up with a couple we saw starting at the same time, but going the other direction -- this meant we were on track and nearly half way there. However the last 5-10 miles nearly did us in. We had one teammate get sick, unable to keep much of anything down and I proceeded to slide down some scree that left my knees pretty banged up. We stopped to filter water any time one of us had a half full supply. The melted snow and gushing river made for easy access to water almost the whole way.

Least to say, we were relieved to see Timberline Lodge come back into view as the sun was beginning to set. We'd been shooting for 10 hours, but that turned into 14 the last few miles as we climbed and descended and then ended on an uphill. Overall, an incredible experience and just happy to have had the opportunity to complete something like this!