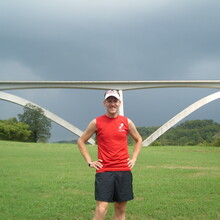 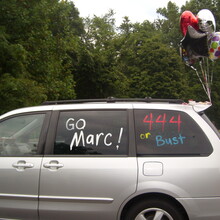 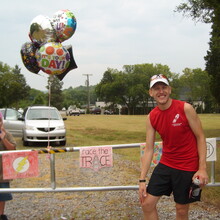 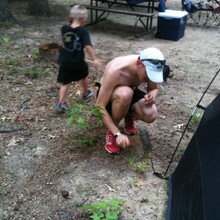 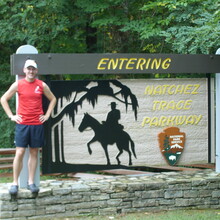 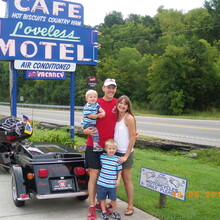 In 2009 I got into ultrarunning, and living next to the Trace at the time, I thought it'd be a good idea to run the entire thing. Originally I planned to do this in one continuous push for about 14 days. However, life, kids, and work got in the way so I ended up heading back out every weekend over the summer to pick up where I left off until completing the entire parkway.

Because FKT's are total 'elapsed time' and not 'moving time', anybody could very easily top this record; and I highly encourage it! Although, I suggest maybe not in the summer months, Mississippi was terribly humid in this season. Because the road is a national parkway, it is free of semi trucks, and if you get out there early enough in the morning you have the entire pavement (or shoulder) all to yourself. Very enjoyable!

From Nashville news outlet WSMV the day before finishing:

"If you had to run 444 miles, you couldn't pick a more scenic backdrop than the historic Natchez Trace. Marc Krejci started that undertaking back in May (2011) to raise money for charity, and he says he'll finish it Saturday in Franklin.

Krejci planned to run the whole Trace at once, but he says he couldn't take that much time off work. So he's been running about 30 miles a day every weekend, then driving to pick up where he left off the following weekend.

"It was 17 days of running. As of tomorrow morning, I will have completed all 444 miles of the Natchez Trace," he said. Krejci says he prepared himself for the long run by changing his running style and going very basic. "I decided I wanted to become an ultra-runner. I went minimalist, I actually went barefoot. I actually shed my shoes and went barefoot running," he said.

Krejci plans to run the final four miles starting at the Historic Natchez Trace building in Franklin, and he has invited everyone to run alongside him, then join him at the Loveless Cafe. Supporters can meet up with him at the bridge at 7 a.m. Saturday."

Along the way, I published a vlog (that's what we called it back in 2011) that chronicled my progress along the way. You may click on my website to see embedded videos and the GPS files of the runs, or watch through subscribing to an iTunes Podcast called "a RUN supreme" or via a YouTube Playlist.