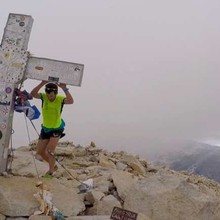 On 2 August 2017, Marc Pinsach ascended Aneto from the town of Benasque in a record time of 2h20m15s, beating the previous ascent FKT of 2h21m11s, set by Quico Soler during the 1999 Nike Aneto X-Treme Marathon. Pinsach's round trip time of 3h55m44s failed to beat the FKT of 3h46m13s set by Soler. In total, Pinsach covered a route of 37.6km and 2,250m elevation gain. Pinsach announced the accomplishment on Twitter (@pinsachmarc) with a short video. More information on these records is given here (in Spanish), with an interesting perspective on the role of glacial retreat during the last 20 years on this speed record (especially impacting the descent time).