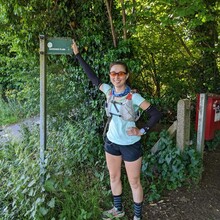 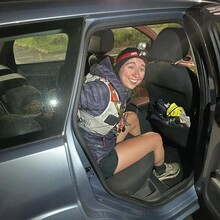 What a journey! Not just the FKT itself, but all the planning and training I’ve done since September, when I found the Oxford Green Belt Way map.

My motivation was to see more of Oxfordshire and I definitely achieved that. I am proud to say that with all the reconnaissance, I was able to confidently navigate the full route :)  It was a great experience to see how the scenery changed through the seasons, and I also loved working on a local project - which allowed me to better learn about where I’ve been living the last several years. Thank you MK (who did the Ramblers Jubilee FKT with me in November) for being part of the research phase!

Back in September, the most I had covered was 18 miles and I found a coach who helped me work up the distance over time (thanks Paul!). I had no idea what to expect during the training, and that was part of why this process felt like such an adventure. I got a great boost from doing an ‘FKT simulation’ of the first 30 miles at the end of April - trying to mimic the day as closely as possible (from Thornhill to Farmoor).

One aspect to note is that a National Grid project blocked off multiple Green Belt paths so I had to plan a re-route through the Baldons. I ended up preferring my re-route to the official route - really gorgeous views while heading south away from the Mole Inn!

I could not have done this without help from my support crew! THANK YOU Meg, Dave, Barbora, Ivan, and Sebastian. Had a great crew including pacers and drivers (sometimes doubling up in both roles) - helping to boost my mood, go through checklists, and re-supply along the way. You can find my aid station locations here (though some were backups in case of parking issues). One super helpful moment came when Barbora (the team’s cow whisperer) helped me get through a large herd of cows at Henwood Farm - they were actually right in front of the stile we needed. Another highlight was when Meg backtracked from Elsfield to Sebastian and me in a field of thick, shoulder-high grass (by Sescut Farm) - it was very dark and we could see Meg's distant head torch from across the field, so great to reunite with a friend in a very difficult moment!

The route and history is well-explained in the current guidebook (and by Paul’s FKT report), so I won’t go into details here - other than navigating at night is a whole different adventure! And there were many places where tall vegetation changed the appearance of a turn so I had to be careful.

Based on my 30-mile simulation, I went into the day thinking it would take 13-15 hours, but it ended up being longer! First third went pretty much as expected based on my April trial run - but a pacer change meant I had to cover a little more solo at the beginning. It was such a mood-boost to finally see Dave and Sebastian waiting for me at Abingdon Lock!! At times it just felt like a normal Saturday long run, like when a runner stopped to ask me directions to Radley Station. In general, things were going smoothly until mile 20-something when left knee pain started (something I hadn’t experienced before) and I had to take more walking breaks. By mile 30 I was pretty much reduced to fast-walking. I had a few little jogging pick-ups on the Oxford Canal (thanks Ivan for the stories and boat jokes here) but after the turn at Thrupp I could only run for 5-10 seconds before the knee pain was aggravated. Slower pace meant the layers came on (added about one per aid station in the last 15 miles), and head torches were ready! While I was expecting some ‘healthy’ green springtime vegetation, I was not expecting waist-high fields of oilseed rape (which meant high-stepping/getting tangled in stems and felt like what I imagine bushwhacking is) - had a major sobbing meltdown here, around mile 42. We also encountered very tall grass and nettles around the Cherwell and Sescut Farm fields, this time with head torches - making it feel a bit more ominous. Knee (and legs in general) felt the same until about mile 50 - but had a major pain at mile 52 where it took me about half an hour to cover one mile (lots of bent-over waddling with hands on knees, where I tried to walk more with glutes to put less pressure on knees). Truly considered giving up here (it was dark and cold, and I was in the most pain I’ve ever felt while running/walking) but Sebastian convinced me to take ibuprofen and I was able to keep going. Knowing that Barbora was waiting for me at Thornhill was a big boost, thank you so much for taking the night shift and for maintaining a positive attitude when I couldn’t decide on food!!

I agree with Simon that one of the highlights is descending from Cumnor and seeing Farmoor Reservoir! Another ‘highlight’ for me was seeing how many places I could spot the Beckley transmitter (it was like an ‘I spy’ that kept me entertained as I trained and yesterday when I did the FKT).

Please feel free to contact me (via the FKT moderators, they have my email) if you are planning an attempt and have any more questions about my FKT! Very happy to share all the ‘local knowledge’ I’ve acquired about the route and discuss seasonal conditions.

Note: I tried to upload several photos but could not, so just put the start and finish. Please see this album for the middle.