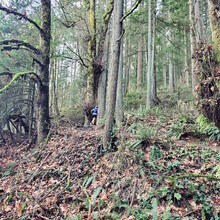 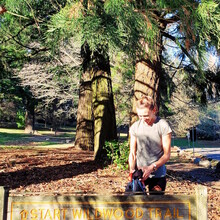 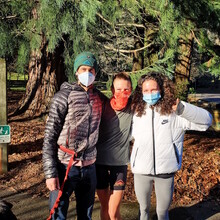 On December 5, 2020 I ran Wildwood End to End from north to south. I started slightly before 10am and ran the whole route solo and carried my fluids and gels in my pack. Other than cheers and photos from a few friends (specifically my awesome coach Tyler Green and Rachel Drake, who gave me the inspiration for this and held the FKT for years) along the way I did not receive any support. It was an absolutely beautiful day in Forest Park, pretty chilly but so sunny. I felt like I went out a little too fast so I tried to dial it in after about 8-10 miles. There were at least 5 downed trees to hop over and one bridge that was out. There was a beam that you could tiptoe across to get to the other side. The first 20 miles were lonely and tough but once I hit 53rd it was so familiar that mentally I became more positive. I felt like I fueled well: I had 4 gels (2 Spring, 2 Maurten) and 2 orange shot blocks. I drank a combination of Nuun and Maurten 160. Pittock was expectedly challenging but it was those sneaky shorter hills after that, that I thought were even more difficult. This was my first solo speed attempt and I thought it was really hard and scary at times. I wasn't sure what was going to happen, I just kept telling myself to keep going! Running for this long and hard is really a mental exercise.