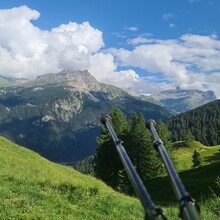 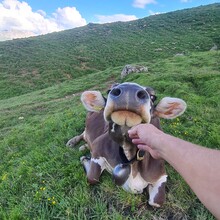 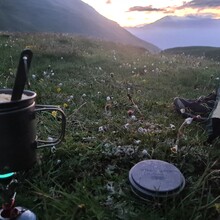 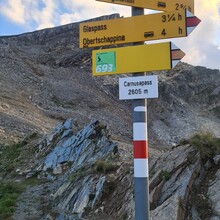 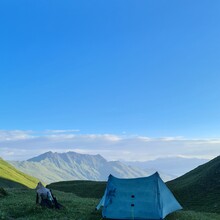 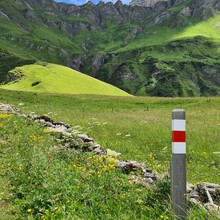 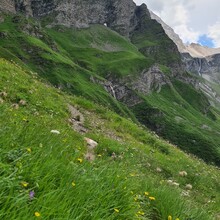 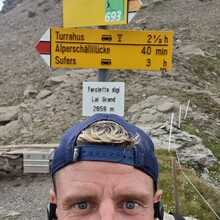 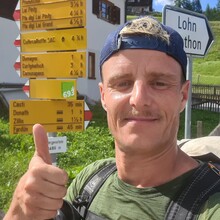 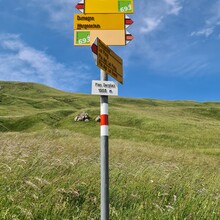 Started to hike out of Wergenstein at 5.34 p.m. That's pretty late but okay given the fact that I had a long day. The pack was quiet heavy because the 2 litres of water that I'd been smart enough to carry along. No water on the way up and obviously none at the peak.

Hiked straight up for about 3 hours in beautiful sunshine with a little lunch in between. Saw a family of Ibex shortly before crossing the pass – only to run close by 3 more of them behind the pass. These guys haven't been shy due to the fact that the beverin area is a national preserve which they seemed to know.

Hiked down into the sunset and set up camp shortly after and had a good warm meal for dinner – next to a fresh little stream. Good thing i brought extra water!

Started the day after a warm night at 6.42 a.m. Had been lucky to camp in super soft moss due to the fact that my NeoAir XLite Sleeping Pad internal fins ripped appart one after another leaving me with one giant balloon. The sun came up behind the mountainridge of Piz Beverin soon after I'd started walking and I made my way down to the Carnus River in the valley while meeting some cows. After refueling my 2 waterbottles, i hiked back up the valley and hit Glasspass and the end of stage 1 at approximatly 8:21.

This is when I took a left to walk along a road leading to some farms at the end of the road. Soon after the trail went steep downhill in a zig zag manner. Stage 2 then passes through a town called Safien Platz, where I passed by an even mix of locals and hikers. The way went up the next hill. I've got a little sweaty when i reached the top of the trail and decided to dry my tent and sleeping bag while having lunch – and got bitten by horseflies pretty intense. Packed up and kept going along the valley until getting some more water at the river next to Turrahus. I'd finished the second stage around 12:50 or after 4:39 and decided to take it easy for the rest of the day.

But a weather forecast later and a short check of the timetable from the public buses later, I'd decided to take my chances and keep going. Because there was still the steep climb up Alperschälli leading into the crossing of Alp Anarosa in front of me. My window kept narrowing while the weather kept getting worse. The last bus would leave at 5:35pm while the third stage would normaly take 6h30min. I accepted the challenge and hiked out at 1 p.m. sharp with the target to catch that last bus in 4.5 hours. The climb was super exhausting but the crossing the Farcletta digl Lai Grand was beautiful – and I managed to get to the other side of the mountain just when rain hit the valley I just climbed out of. The way back down to Wergenstein was mostly smooth and I finished stage 3 sweaty but as a happy man at exactly 4 p.m.

This is when I walked over to the Restaurant Capricorns and splurged myself with a good old beer.