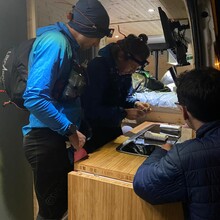 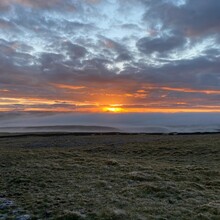 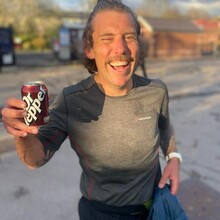 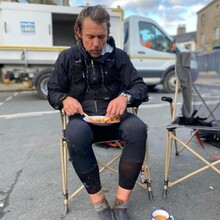 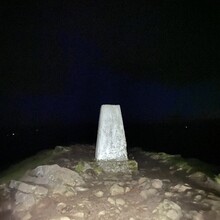 Where to start. I’ve been planning on running this route for a while and had scheduled it for mid April however I unfortunately got ill a day before and had to reschedule.

Although there was no current fastest listed on the FKT site I wanted to do my due diligence. After contacting A Dales Highway website and was informed that the current fastest known record was set in 2017 by Mark Collinson, Matt Neale and Davie Dixon in a time of 26 hours and 15 minutes.

Originally the plan was to set off at 4am however after having to reschedule I decided to set off at 11pm so that I would cover the more technical sections in daylight.

Myself and my crew of 4 arrived in Saltaire the evening before to run logistics and schedule and we set off just after 11pm as planned.

Leg 1 from Saltaire to Skipton (28km and 805m ascent) was quite straight forward, there were some climbs but more gradual and nothing to technical. Terrain was quite boggy in sections but we were moving well and arrived at CP1 40 mins ahead of schedule. 10 mins was spent at the CP then set off.

Leg 2 from Skipton to Settle (31km 1145m ascent) was a bit different, sleep deprivation started to hit a bit on some of the climbs and there was a thick frost. Despite the tiredness I was still moving well and caffeine was becoming my best friend. We finished this leg 5 mins ahead of schedule (45 mins up at this point). 15 mins was spent at this CP, scrambled egg, beans, toast and coffee were a big boost.

Leg 3 Settle to Chapel Le Dale (22km 902m ascent) was a bit of a blur to be honest but some undulating running finished with a big climb to the summit of Ingleborough. Weather started to get a bit rainy on the summit but after a quick out and back to the trig point we started our descent and the sun was back out. The first part of the descent was hard on the quads but then it eased and I opened up on the final 2km stretch to the CP where there was pizza, avocado and mango waiting :-) another 15 mins was spent here

Leg 4 Chapel Le Dale to Sedburgh (24km 600m of ascent) was a break on the legs after the previous leg and had some nice flat undulating terrain with a couple of climbs. It followed the river for a large section. We were still on schedule at this point for a 19 hour 20 minute time although any contingency had now been used. At this section hot pasta, mango and rice pudding were on the menu. After 15 mins we set off for leg 5

Leg 5 Sedburgh to Newbiggin on Lune (18km 810m of ascent) was always going to be tough and this stage and it didn’t disappoint. The climb almost starts immediately and most of the 800m of ascent is consumed within the first third. I was really struggling with sleep (or lack of) at this point and was soon becoming dependent caffeine. Once I pushed through it was fine and climbed well. The downhills were fun and the soft terrain almost felt carpet like which made a difference to some of the rocky and aggressive terrain experienced earlier on. Rolled into CP after a 3km road section 20 mins behind schedule but still had a sub 20 hour time in site. 10 mins were spent here. I didn’t eat much just changed clothes, ditched running vest, put on fresh shoes/socks and of course loaded up with caffeine gels.

Leg 6 Newbiggin on Lune to Appleby (21km 350m ascent) was better than expected in the first third. More of the carpet like grass followed by some mellow climbs. Sub 20 hour was in sight till we got the Eden River and were stopped in our tracks by fields of long wet grass with mole hills everywhere. This was the last place I wanted to roll my ankle (or worse) so we slowed it down and marched through this 8km section which added to our time and unfortunately put the sub 20 out of sight. This aside I was still moving well and we pushed hard on the last 1.5km toad section for a strong finish.

Overall a great bimble and fantastic route with some great friends.

Special thanks to Sam Hill, Ned Blanch, Ryan Cook and Ben McGovern for support and to Montane, Leki and Precision Hydration for taking care of kit and hydration.