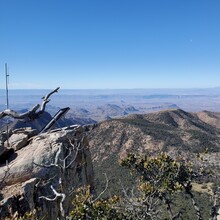 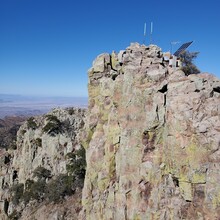 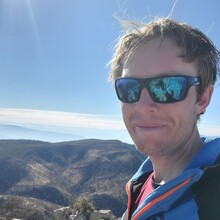 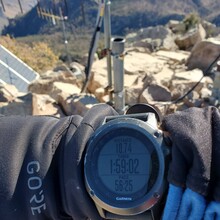 While planning a bikepacking trip down in Big Bend National Park, I looked up some of the park's running FKTs and kept this one in the back of my mind to take a crack at given enough time and energy. Circling the park during the prior two days, and essentially making a large loop around the Chisos Mountains, it was easy to work up the motivation to run all the way up and down them.

After camping the night before along Old Maverick road, I took my time in the morning and got started shortly after 9am. The gentle dirt road climb during the first two miles was a nice chance to get the running legs back and warm up before hitting some tougher terrain. The turn onto the Oak Springs Trail marked an extreme change in terrain going right into some of the rockier and looser sections of the whole route. By the time I found a good rhythm, it was time to descend briefly, then climb the more gradual Window Trail to Chisos Basin. The watch read 57 minutes and change at the end of the Window trail and beginning of the main route up Emory Peak.

From here, the trail became significantly more crowded with day hikers and backpackers, as you would suspect at a National Park. Toward the end of the Pinnacles trail, I managed to remind myself to take in a Gu before veering off for the final 1.5 miles up Emory. Reading up on the peak, I thought the scrambling section started much earlier, so I was surprised when I came up against the summit much sooner than expected. Like a few other people already on the peak, I first scrambled up the wrong little rock outcrop, before realizing the one next to it (with the antennas) was the actual Emory Peak. I was on the correct peak in about 1:59, and spent close to 2 minutes on top before the long descent back.

The way back down was all about finding a balance between keeping the pace honest, while trying not to be so reckless as to sprain and ankle, or cause a nuisance to people out enjoying a pleasant hike. All went pretty well aside from getting a bit warm toward the end and taking a silly fall near the end of the Oak Springs Trail. My legs couldn't find as much speed as I hoped on the final 2 mile road section, but I was able to finish with a 6ish minute mile to dip under 3:30 for the round trip. After that, it was time for a much bigger test of endurance in the form of a 12 hour drive back to Colorado.

Big thanks to Tyler Priest for posing this route! I'd love to see it become one of the more competitive FKTs in the park since it highlights the stark change in environment from desert floor, through juniper forest to mountain top. For the multi-sporters out there, be sure to bring your mountain bike or rugged gravel bike along to explore some of the park's backcountry roads. Makes for a nice warm-up!