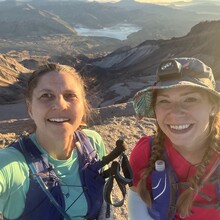 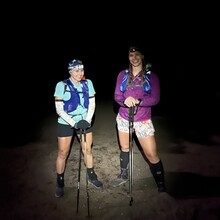 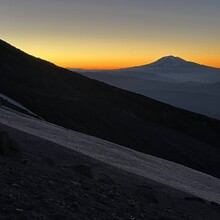 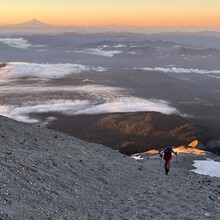 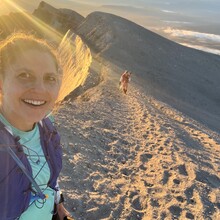 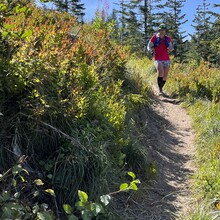 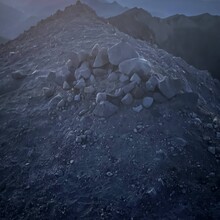 I’ve heard that 1 or 2 women have finished this route before me: Lauren Newey in 2014 in somewhere around 21 hours, and maybe someone in 2019 in an unknown time. From what I know of these runs, they would count as supported FKTs due to being semi-organized group events. I planned to run this with Melissa Sholomicky. We wanted to be unsupported, which we felt would give us a little room timewise if we didn’t make our 20 hour goal time. The guidelines state “To be Unsupported, all equipment and gear must be carried from start to finish… One may drop gear (such as a large pack while going up and back on a summit) if one returns to it and brings it back to the finish on the same trip.” This is the unique route where we could really take advantage of dropping some gear. We planned to carry a bear canister with food 2 miles from the start to the junction of the Loowit. This would allow us to resupply after completing the first summit and again before the second summit. We could then carry it off the mountain to the finish so that no gear would be “cached in advance or left along the way.” We decided to do the Loowit clockwise because we could get water at Chocolate Falls, just a few miles before starting our second summit.

We started at 3:30 in the morning. Somehow we seemed to find a relatively clear route through the lava fields, making this the smoothest St Helens ascent that I’ve done. Dawn arrived as we were on the last push and the first rays of sun hit us just as we reached the crater rim. It was glorious up there that time of day! We navigated the rim to the true summit and started back down. I tried to follow the same route down as we did up, but going downhill it didn’t really work.

We returned to our cache, stocked up on food and sunscreen and headed out on the Loowit. My filter was in the cache, ready for me to grab for the Loowit circumnav, but in the chaos of the moment I forgot it. Fortunately, Melissa had some iodine I could use. We set a solid pace of power hiking most things with short stretches of jogging on the flat and downhill sections. We watered up at the Toutle River and soaked our clothes to keep cool. Things got much hotter on the climb out of the Toutle. We were in the blast zone now so there would be no notable shade until we got to Willow Spring. We stuck with what we’d been doing, mostly walking with little bits of running in the flats and downhills. Melissa mentioned that she was struggling with the uphill sections as we went in and out of little gullies. When we hit 10 hours, I noted that we were 22 miles in, pretty close to the halfway point of the day. A couple miles before Willow Spring, Melissa said she wasn’t sure that she’d make the 2nd summit. We agreed to figure out a plan once we both arrived at Willow Spring. I hiked ahead so I could do some foot maintenance and water up while I waited. Melissa was really feeling the heat by the time she got to the spring. She felt confident that once she had rested gotten some water, she could safely complete the circumnav by herself. We agreed that I would continue with the FKT, while she finished the circumnav.

This meant that I was now shooting for a supported FKT, so I now absolutely had to be faster than 21 hours. I was a bit behind that pace. Once over Windy Pass, I started charging down because I wanted to make good use of the runnable terrain in the Plains of Abraham. After so much hiking it was fun to run again! I continued feeling good through all the gullies and was grateful to finally have tree cover again near June Lake. That lava field after June Lake was rough. Maybe I was just tired, but the route through it seemed much less obvious than the lava fields I’d navigated earlier in the day. I refilled my water as planned at Chocolate Falls and headed for Monitor Ridge.

I arrived at our cache close to on schedule for that 20 hr finish and started racing the sunset up the mountain. I was moving well, but it was not quite as smooth as it had been in the morning. It would have been nice to see anyone else up there, but the last person to descend did so right as I left the cache. I turned my headlamp on when I hit the crater rim and navigated the rim to the true summit and back. I was able to run down the sandy part at the top, but once I hit the lava fields it was very slow going. Descending St Helens after dark is not fun. The route marking poles were too far apart to keep them in my headlamp beam and the rocks themselves required my full concentration. I did get an amazing view of the moon rising near Mt Adams though. Super relieved when I finally followed the marker poles off Monitor Ridge and onto real trail. Then 2 more miles of running back to Climber’s Bivouac and the finish.

(There is a little overlap in my 2 GPS tracks. Total time was recorded separately with a stopwatch.)