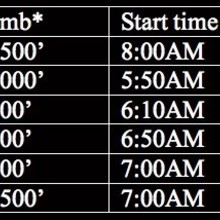 Matt Kirk and Carl Laniak came up with the idea of quasi-organized, simultaneous self-supported speed hikes of the BMT. While this was not a race, it was intended that the participants would do the trail as quickly as possible. They also set up a website for this unique "event". Kirk, Laniak, Mohammed Idibi, Kevin Lane and Charlie Roberts started their hikes at 8:00 a.m. on May 22, 2009, after sleeping on the summit of Springer Mountain. Eventually, everyone dropped out of the attempt except Kirk, who pressed on to complete the trail in just under 6 days, including a mammouth final day push of 71 miles. Kirk's report is very detailed, and discusses the home-made gear he used on the trip. His splits are as follows (climb based on the BMT profile)